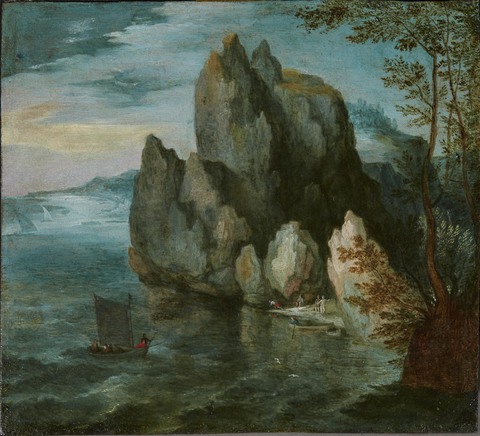 Seascape with a High Cliff

1
Link Copied
With its high horizon line and bluish-green palette, this exquisite painting exemplifies the Flemish landscape tradition in the late sixteenth century. The artist has depicted a winding shoreline that snakes into the distance on the left and is punctuated by distant hilly terrain and a group of trees with a lace-like profile of leaves at the right. Three vessels appear in the distant inlet, while a fishing boat rides the waves in the foreground. Four delicately painted figures stand on a wedge-shaped bank, and a fifth is perched in a mastless craft along the shore. The center middle ground is dominated by a rocky cliff that serves as the primary motif of the landscape. The reflection of this outcropping on the water’s surface further extends its presence, and the almost square format of the painting neatly frames it. The copper support highlights the artist’s detailed touch and the cliffs' complex surfaces. In spite of its high level of technical precision, this work is unsigned and undated.
2
Link Copied
The painting is now recognized as the earliest known work by Jan Brueghel the Elder. The specialist Klaus Ertz has based his assessment on its close relationship to two unsigned paintings with expanded compositions: Rocky Coastal Inlet with Battle Ship (fig. 1) of about 1592, also on copper, and A Rocky Coastal Scene (fig. 2) of about the same time on panel. Of these two works, the former shows more direct similarities to the Clowes painting, with an almost one-to-one correspondence in certain passages. The fishing boat traveling across the foreground exhibits the same positioning of vessel and sail, contains a similar number of figures gathered into three groups, and even has a figure wearing a red shirt at the helm. The repoussoir trees at the right edge occupy a proportionally similar amount of space, and the silhouette of the leftmost lower branch against the face of the rock echoes that in the Clowes painting. Finally, the arrangement of the figures along the narrow strip of shore beneath the cliff is precisely the same in the two paintings: a pair of figures at right, a single figure to their right, then a fourth figure crouching at the water’s edge. In front of the pair, two fishing boats, one of which is manned, are arranged perpendicular to each other.1 Except for the sandy cove at which fishermen empty their vessels at the right and the large triple-masted ship at the left, Rocky Coastal Inlet with Battle Ship follows very closely Seascape with a High Cliff.
placeholder
Figure 1: Jan Brueghel the Elder (Flemish, 1568–1625), A Rocky Coastal Inlet with Battle Ship, about 1592, oil on copper, 5-29/32 × 7-41/64 in. Private Collection, Germany. 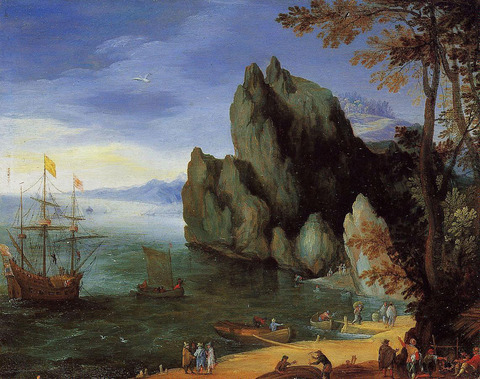 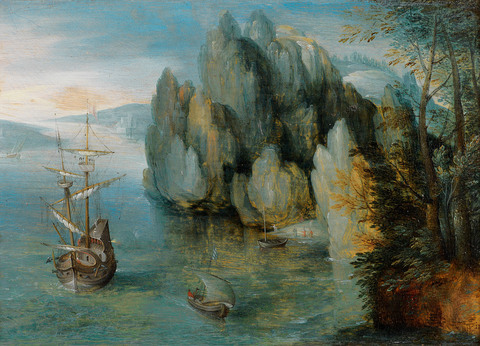 Figure 2: Hans Liefrinck II (Netherlandish, 1538–1599), A Rocky Coastal Scene, about 1592, oil on copper, 5-13/16 × 7-15/16 in. Private Collection, Belgium. Photo Courtesy of Bonhams.
3
Link Copied
In spite of these similarities, the Clowes painting has been attributed to a number of artists. When Mrs. George Henry Alexander Clowes acquired the painting in 1960, it was attributed to Brueghel’s father, Pieter Bruegel the Elder (about 1525–1569), one of the foremost Flemish painters (fig. 3) of the sixteenth century. Yet, in the late 1960s when Mark Roskill was preparing his manuscript on the Clowes collection, professor Julius Held opined that the work was by the hand of Bruegel’s second son, Jan, and this theory was adopted by Ian Fraser in 1972.2 Brueghel specialist Klaus Ertz, working from a black-and-white photograph,3 rejected the work as a “weak, reduced” copy after Rocky Coastal Inlet with Battle Ship in his 1979 catalogue raisonné of the artist and in successive publications.4 After viewing the work in person in 1984,5 he revised his opinion and declared that the Clowes painting was the earliest painting by Brueghel’s hand, datable to around 1591, and that the larger Rocky Coastal Inlet with Battle Ship was executed by the painter the following year.6 He has upheld this attribution in all writings subsequent to 1984, citing, in particular, the precision and coloring of the highly detailed scene, the swelling tree trunks at the right edge, and the bizarre jagged rock formation as characteristic of the artist.7 He also cites the painting technique: that of translucent glazes layered to produce an effect of three-dimensionality. In the 2008 exhibition catalogue, he posited that it may even be an unfinished first sketch.8
placeholder
Figure 3: Pieter Bruegel the Elder (Flemish, around 1530–1569), Landscape with the Fall of Icarus, around 1560, oil on canvas, 28-15/16 × 44-3/32 in. Royal Museums of Fine Arts of Belgium, Brussels. 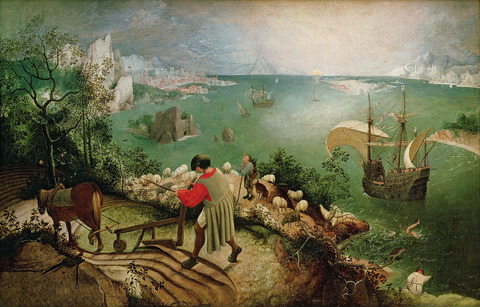 Figure 3: Pieter Bruegel the Elder (Flemish, around 1530–1569), Landscape with the Fall of Icarus, around 1560, oil on canvas, 28-15/16 × 44-3/32 in. Royal Museums of Fine Arts of Belgium, Brussels.
4
Link Copied
The dissenting voices in the attribution to Brueghel have been that of Margarita Russell and Elizabeth Honig. Russell, following M. L. Wurfbain’s reading of the monogram on A Rocky Coastal Scene as “HL (in ligature) FE” and his assignment of the painting to Hans Liefrinck II (1538–1599),9 repositioned the Clowes painting as the work of Hans’s son, Cornelis Liefrinck II (about 1581–after 1640), in 1992. In the constellation of paintings that she considers,10 Russell observes foremost the Northern Netherlandish landscape tradition of the 1560s–1580s that would have informed the art of the Leiden-based Cornelis the Younger: the sea expanding into the distance and rocky terrain descending from the compositions of Joachim Patinir (about 1480–before 1524) or Hans Bol (1534–1593).11 Much of her argument hinges upon the identification of the triple-master in A Rocky Coastal Scene as an antiquated vessel, which is then updated in Rocky Coastal Inlet with Battle Ship. This updating of seafaring technology, combined with variations in style, led Russell to believe that A Rocky Coastal Scene preceded Seascape with a High Cliff. In contrast, Honig, architect of the Jan Brueghel the Elder Complete Catalog database, confirms the attribution of the Clowes painting to Jan in her entry on the work,12 but questions the painting’s authorship in a comment dated 18 July 2015 associated with A Rocky Coastal Inlet with a Battle Ship.13 The opinions of Russell and Honig indicate that the complicated relationship between these three paintings can be interpreted in vastly different ways.
5
Link Copied
Brueghel, a specialist not only in riverscapes but also in floral still lifes and allegorical paintings executed in collaboration with other artists,14 was highly respected amongst his peers in Antwerp and was celebrated for his landscapes with small figures by the turn of the seventeenth century.15 Born in Brussels and trained first in watercolor painting by his maternal grandmother Mayken Verhulst (about 1520–1600) and then in oils by Pieter Goetkindt (about 1539–1583),16 Brueghel spent the years between 1590 and 1595 in Italy. He is documented in Naples in 1590, in Rome in 1592–94 in the orbit of Paul Bril (1554–1626), and in Milan in 1595 and 1596 before returning to Antwerp in October 1596 and joining the guild the following year.17 He was appointed court painter to the Archdukes Albert and Isabella in 1608; in 1614, Duke Johann Ernst of Saxony visited his studio and that of Peter Paul Rubens (1577–1640). In 1618, the city magistrates of Antwerp commissioned the twelve foremost painters of the city to execute samples of their work for the Archdukes, a project managed by Brueghel. Cardinal Federico Borromeo, a longtime patron of the painter, and Archduchess Isabella served as godparents to Brueghel’s daughter Clara Eugenia in 1623. His elevated position on the European market for art may account for the numerous paintings that imitate his finely rendered works.18
6
Link Copied
While Brueghel’s oeuvre is typically positioned in relationship to the world landscape,19 foremost in its winding river, mountainous elements, and open sky, all seen from an elevated vantage point and tripartite color scheme, Ertz distinguishes the painter as an innovator in this category of landscape painting through his privileging of the rocky outcropping. By placing it at the center of the composition, rather than relegating it to the perimeters, as his father had done (see fig. 3),20 Brueghel established a new compositional type in landscape painting. This placement, combined with the highly idiosyncratic form of these cliffs—comprising multiple but parallel faces, slightly forward-leaning, with sharp and menacing-looking summits—calls to mind the painter-theorist Karel van Mander’s well-known quotation about Brueghel’s father swallowing up the Alps during his travels and spitting them out onto his paintings upon his return to Antwerp.21 Ertz seems to locate this interest in unusual outcroppings as a natural development in the world landscape tradition in which his father participated, but there are numerous other sources for this motif. The pioneering Patinir incorporated distinctive rocky outcroppings into some of his paintings, as seen in his Landscape with the Destruction of Sodom and Gommorrah (fig. 4).22 Similarly, Bruegel, with his numerous drawings and prints of valleys seen from a high vantage point and with a wide horizon, would have offered ample inspiration for his son’s exploration of this rocky motif.23 One clear source lies in the work of Bril, whose impact upon Brueghel is evident in the surviving copies he made after the work of Paul’s brother Matthijs (1550–1583) that were in Paul’s possession.24 An etching (fig. 5) dated 1590 by Bril himself could have offered inspiration in its rightmost outcropping, with its prominent rear promontory surrounded by shorter, slightly inclined craggy forms. This spectrum of visual material indicates a veritable affinity in the late sixteenth century for dramatic, jagged forms lining waterways.
placeholder
Figure 4: Joachim Patinir (South Netherlandish, about 1480–before 1524), Landscape with the Destruction of Sodom and Gomorrah, about 1520, oil on panel, 11-13/16 × 8-55/64 in. Collection Museum Boijmans Van Beuningen, Rotterdam. Loan: Rijksdienst voor het Cultureel Erfgoed 1948 (former collection Koenigs), Inv. 2312 (OK). Photo Credit: Studio Tromp. 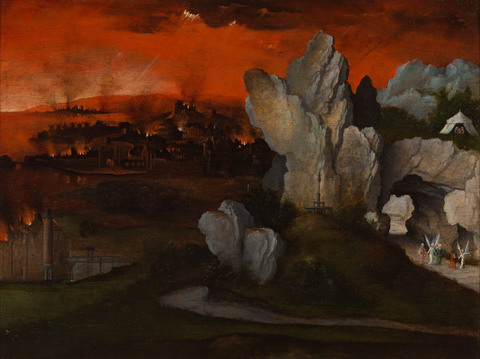 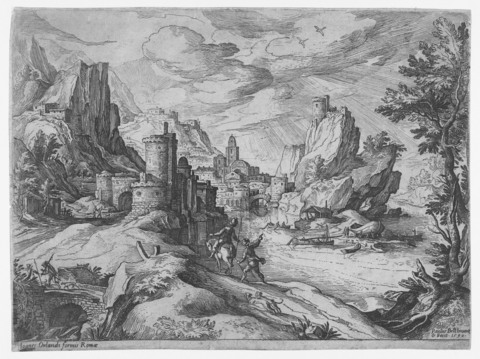 Figure 5: Paul Bril (Flemish, 1554–1626), Rocky Coast in Campania with City and Travelers, 1590, etching, 8-17/64 × 11-9/64 in. Rijksmuseum, Amsterdam, RP-P-OB-12.465.
7
Link Copied
Evidence of this appreciation for rocky cliffs was observed by Elizabeth Honig. In Frans II Francken’s Collector’s Shelf (fig. 6) of about 1620–1626, a composition very similar to Seascape with a High Cliff is reproduced at the right edge of the table.25 The presence of the painting within this fictive Wunderkammer is a testament to the high esteem in which it would have been held: not only do the prominent rocks in the composition relate to the many shells that are crowded onto the table, as part of the dazzling naturalia that appealed to early modern collectors, but it also celebrates the Clowes painting as an impressive specimen of artificialia.26 Even as early as the seventeenth century, Brueghel’s Seascape with High Cliffs was celebrated as a striking and distinctive contribution to the Flemish landscape tradition.
placeholder
Figure 6: Frans II Francken (Flemish, 1581–1642), Collector’s Shelf, about 1620–1626, oil on panel, 39-49/64 × 56-19/64 in. Quadreria della Società Economica di Chiavari, Chiavari, inv./cat.nr Botti 20. Photo Courtesy Società Economica di Chiavari 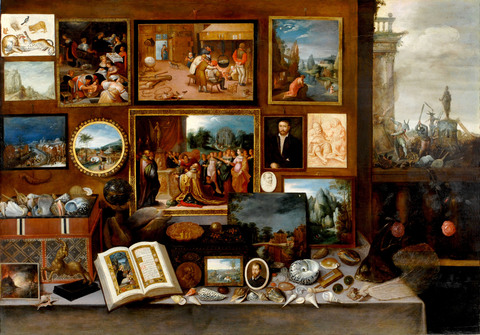