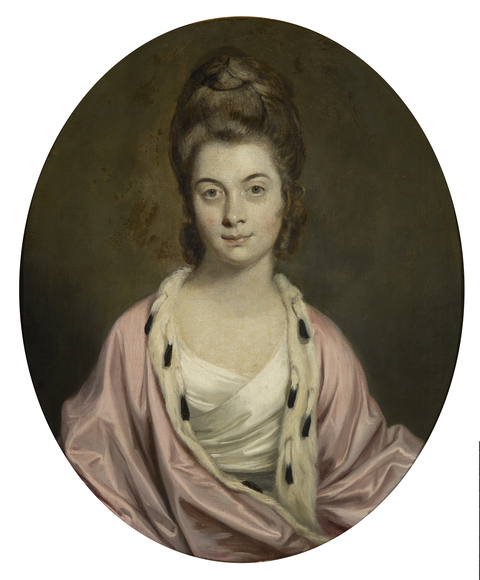 1
Link Copied
The sitter in this charming portrait is Charlotte (1747–1798), daughter of William Hammond of St. Alban’s Court, Nonington, Kent, and his wife, Charlotte, eldest daughter of Dr. William Egerton, prebendary of Canterbury. The couple also had two sons—William and Anthony, rector of Ivy church—as well as two other daughters, Anna Maria and Catherine. In January 1771, Charlotte Hammond married Thomas Watkinson Payler, Esq. (1747–1810) of Heden, Kent. He was the son of Thomas Tunner of Heden, who changed his name to Payler, and the grandson of Thomas Turner of Ileden in the parish of Kingston, near Canterbury. The couple had one son, William. Charlotte Payler died in 1798, aged 51.
2
Link Copied
Pendant portraits of Charlotte and Thomas Watkinson Payler were commissioned from Reynolds on the occasion of their marriage. His pocket books list a total of five appointments with Mrs. Payler in 1771: 13 May (at midday); 17, 21, and 23 May; and 24 June (all at 11 o’clock). A payment of 70 gns. for both portraits is recorded in the ledger on 24 June. Thomas Payler sat for Reynolds on 3 May 1771, and a note opposite the week of 15 April, possibly not in Reynolds’s hand (according to David Mannings), reads: “Mr Payler, Ileden near Canterbury, per Whitstable [illegible] from Wool Key by the Tower."1
3
Link Copied
Mrs. Payler is depicted half-length, facing the viewer, in a pink, ermine-trimmed robe over a white dress, in a feigned oval. Her hair is piled on top of her head according to the fashion of the day. Mr. Payler, also in a fictive oval, faces left (as though glancing toward his wife), and wears a red coat (fig. 1). Both portraits were examined by Campbell Dodgson, keeper of prints and drawings at the British Museum, in 1922, at which point they still hung at St. Alban’s Court, then the home of Egerton Hammond (fig. 2).2 Presumably, they were originally painted for Mrs. Payler’s parents. Egerton Hammond consigned them for sale at Hurcomb’s on 20 April 1931 (lot 118b), but they failed to sell and were returned to him.3 The next line in the provenance is not entirely clear, but it seems likely that the paintings were sold by Egerton Hammond directly to Robert C. Vose Galleries on Boylston Street in Boston as a pair. This had evidently taken place by the time they were seen by W. Roberts, who wrote on 26 November 1931 that “both portraits have remained together until now and have been acquired privately from the family."4 Of the Clowes painting, he wrote: “This portrait of Mrs. Payler is an exceptionally attractive example of Reynolds, full of a dignity and a charm not always present in his works of this period.” Somehow, the portraits were then separated; presumably Vose retained the portrait of Mrs. Payler but sold the portrait of her husband to Newhouse Galleries, in New York. (That portrait was subsequently sold to Willits J. Hole of Riverside, CA, who donated his collection to UCLA.)5
placeholder
Figure 1: Attributed to Sir Joshua Reynolds (English, 1723–1792), Portrait of Mr. Payler, n.d., oil on canvas, 29-7/8 × 25-1/2 in. Collection University of California, Los Angeles. Hammer Museum. Willitts J. Hole Art Collection. 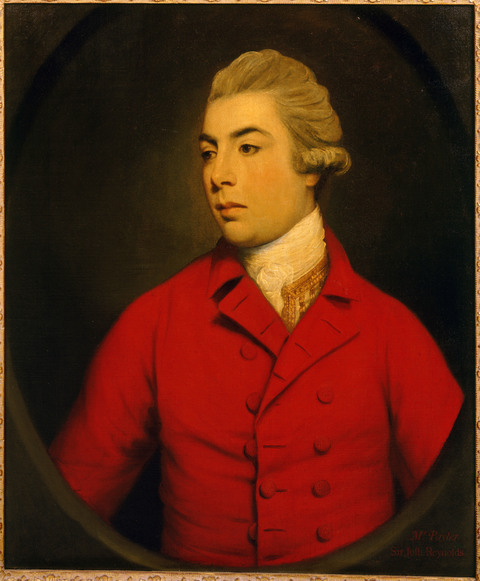 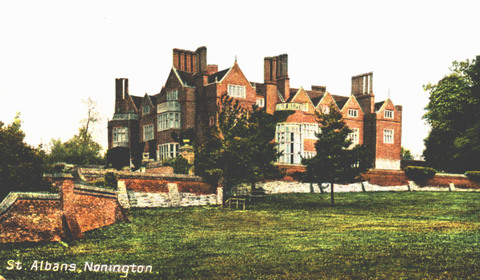 Figure 2: New St. Alban’s Court house gallery, Nonington, Kent, about 1910, postcard, 5-1/2 × 3-1/2 in. Courtesy of Clive Webb, Old Parish of Nonington website.
4
Link Copied
Mrs. Payler’s portrait was included in the exhibition American and European Painting from Vose Galleries at the John Herron Art Institute, held at what is now the Indianapolis Museum of Art at Newfields, from 6 April to 2 May 1935. It was there that George Clowes saw the painting, which is listed in the exhibition checklist with an asking price of $35,000, making it one of the more expensive paintings in that show.6 On 24 April, Booth Tarkington (1869–1946), the Pulitzer Prize-winning novelist and trustee of the John Herron Art Institute, wrote to Clowes advising him on current prices for English school portraits; his mention of a conversation they had had the previous day suggests that it was on 23 April that Clowes had seen and admired the painting with Tarkington.7 Tarkington wrote: “Any veritable Reynolds in good condition and of an agreeable or interesting subject is going to be a fairly high-priced picture and will no doubt be gaining in value if other tangible properties so gain. I don’t know what Mr. Vose is asking for the portrait; but up to 1930 I would classify it in price at a low of 40,000 dollars and I doubt if it could then have been bought for less.” Tarkington went on to offer confidential advice about negotiating with the dealer: “Almost invariably he has first mentioned a price that he descends from in one jump, so to speak, to his second and last price. That is, so far as my experience goes, he might be called a two price dealer.” This, in fact, appears to have been the case: an invoice dated 29 April lists the purchase price of Mrs. Payler as $15,000, less than half the original asking price. (Clowes evidently paid in part through the exchange of another picture, listed as a Portrait of a Lady by Hogarth and valued at $3,500.)8 Another document in the file, a letter from the secretary of Museum Director Wilbur D. Peat, Esq., to Robert Vose, cites a $500 commission due to the museum for its role in facilitating the sale of the Reynolds to Clowes.9
5
Link Copied
In his unpublished 1968 catalogue of the Clowes collection, the art historian Mark Roskill mistakenly included Newhouse Gallery in the provenance for Mrs. Payler, presumably because Newhouse handled the sale of Mr. Payler. He observed studio assistance in certain areas, such as the costume, which is consistent with Reynolds’s working practice at the time.10
6
Link Copied
One of the most immediately noticeable qualities of the portrait is the sitter’s ghostly pallor. This is an issue often seen in portraits by Reynolds, and it is the result of his constant experimentation with different pigments, some of which—particularly the red tones—proved unstable and fugitive when exposed to light. Reynolds’s experimentation with media and materials is the subject of a 2014 National Gallery study, which highlights the artist’s own comment on the subject: “I tried every effect of colour, and by leaving out every colour in its turn, showed every colour that I could do without it. As I alternatively left out every colour, I tried every new colour; and often, as is well known, failed."11 Reynolds employed red lake pigments throughout his career, and these faded so quickly that the deterioration could be observed even during his lifetime. (This becomes less of a problem in paintings from the mid-1770s onward, as Reynolds attempted to replace the fugitive pigments with other reds, although he never entirely eliminated lakes from his palette.) For the portrait of Mrs. Payler, which dates from 1771, he used them in the sitter’s complexion, which has lost its rosy hue. According to an article that appeared in the 1781 Public Advertiser, Reynolds attempted to remedy the fading in his portraits “by better ascertaining the proportions of vehicle and colour and by more happily adjusting the qualities of his vegetable and mineral red, increasing the vermilion and decreasing the carmine."12
7
Link Copied
Sir Joshua Reynolds was one of the most fashionable portraitists in England in his time. He was elected the first president of the newly established Royal Academy of Arts in 1768, which led to his being knighted the following year by King George III (1738–1820). Reynolds is remembered as a theorist as well as a painter, and between 1769 and 1790 he delivered his Discourses, a series of lectures on art, at the Academy. Reynolds counted English painters Joseph Mallord William Turner (1775–1851) and John Constable (1776–1837) among his admirers, and upon his death on 23 February 1792, the philosopher Edmund Burke (1729–1797) declared in the artist’s obituary: “He was the first Englishman who added the praise of the elegant arts to the other glories of his country. In taste, in grace, in facility, in happy invention, and in the richness and harmony of colouring, he was equal to the great masters of the renowned ages. In portrait he went beyond them…. He possessed the theory as perfectly as the practice of his art. To be such a painter, he was a profound and penetrating philosopher."13

By descent within the family to Egerton Hammond, Non[n]ington, Kent, until about 1931.15

A. Ian Fraser, A Catalogue of the Clowes Collection (Indianapolis: Indianapolis Museum of Art, 1973), 92–93;

The painting is supported by a glue lining, which appears secure. There is evident cusping that shows the painting remains at approximately its original dimensions. The original tacking margins were trimmed slightly, presumably when it was relined. The sitter is framed by a painted oval, which may or may not have been slightly trimmed. There is a fine network of craquelure consistent with age. The paint was applied wet-in-wet, and some slight impasto is visible in the folds of the fabric, in the white and pink areas. The hair was painted in brown glazes with a few defining black lines, using medium-size brushes. Overall, the portrait is relatively thinly painted, and this is especially evident in certain places; some light surface abrasion has presumably made this more evident. There is a thinly applied brownish green ground, with the canvas weave showing through in places, and an off-white ground visible underneath the figure. No evident underdrawing can be seen with IRR; this is typical of Reynolds’s working methods. Some minor pentimenti are visible in the sitter’s hair and in the clothing folds on her proper left. Some of the pigments have been fugitive, especially in the flesh tones, which were apparently painted with lakes. The sitter’s robe remains pink and was painted using more stable vermilion pigments. There is some discolored retouching to the face and neck, as well as some recent retouching, with deliberate additions of canvas texture. The old resin varnish is discolored and has pooled in the canvas divots. The portrait is inscribed lower left, outside the painted oval, in vermilion: “Mrs. Payler. / Sir Josh. Reynolds.” The portrait of Mr. Payler is comparably inscribed lower right “Mr. Payler/Sir Josh. Reynolds.” There is a stamp on the lower stretcher bar: “R.C. Vose PAINTINGS BOSTON,” as well as a label attached to the frame, verso: “Lent Robert C. Vose Galleries/168.1930.” The painting is shown in a reproduction frame with an oval-shaped opening, of about 1900, carved oak with gilding over reddish orange bole, with decorative acanthus leaves and husk. It is a version of a French pattern of about 1745.