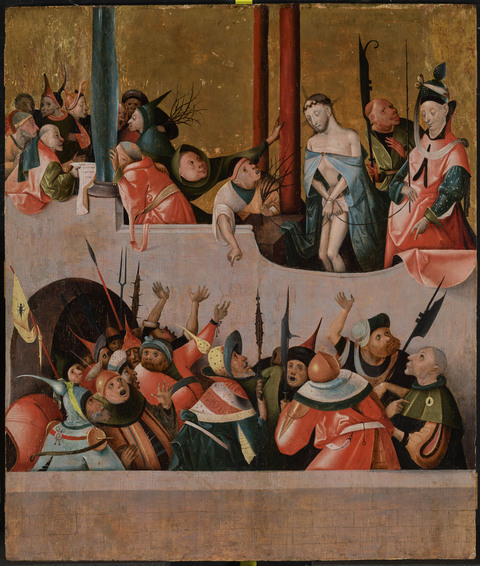 1
Link Copied
Bosch’s Ecce Homo combines the episodes of Christ’s trial and mocking, all taking place in a crude palace setting. At the upper-left corner, a group of priests and scribes convene to condemn Christ. One member closes his eyes, scornful of the convention, and another yawns while the verdict is being handed out. Standing next to Pilate, Christ, crowned with thorns and cloaked in a mock royal robe, accepts his plight peacefully. One tormentor next to him, birch rod in hand, tries in vain to draw Christ’s attention to the hysterical soldiers below. Pushing and shoving, the clamorous and heavily armed group rushes to the terrace for a better view. The crowd gawks at their surroundings, stupefied by their collective furor.
2
Link Copied
Christ and Pilate look strikingly similar: both have ashen complexions, and both appear to have their eyes closed. Holding a scepter in his proper right hand, Pilate points with two fingers of his left at the agitated crowd below. Vaguely reminiscent of the gesture of blessing, Pilate’s motions are echoed by the upstretched, waving arm of the soldier dressed in red. Such sardonic gestures serve to reinforce the painting’s theme; they also differ from more traditional gestures assigned to Pilate, such as the one in Bosch’s Ecce Homo in Frankfurt (fig. 1). Pilate’s gesture in that work—where he points at Christ with one finger—complements the prefect’s inscribed speech: “Ecce homo.”
placeholder
Figure 1: Hieronymus Bosch (Netherlandish, about 1450–1516), Ecce Homo, about 1490, mixed technique on oak, 27-63/64 × 23-13/16 × 13/64 in. Städel Museum, Frankfurt, Inv. 1577 © Städel Museum, Frankfurt am Main / ARTOTHEK. 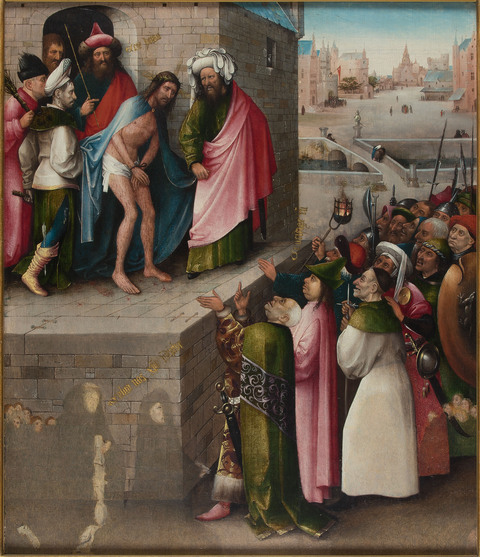 Figure 1: Hieronymus Bosch (Netherlandish, about 1450–1516), Ecce Homo, about 1490, mixed technique on oak, 27-63/64 × 23-13/16 × 13/64 in. Städel Museum, Frankfurt, Inv. 1577 © Städel Museum, Frankfurt am Main / ARTOTHEK.
3
Link Copied
Pilate’s resemblance to Christ poses an interpretive challenge: how to distinguish the good from the hypocritical, if the hypocritical, by definition, appears good? Admittedly, the two figures' many different attributes rule out the possibility of misinterpretation. Such resemblance, therefore, creates more readily an interpretive opportunity for the viewer to contemplate the danger of false belief. Analogizing Christ and Pilate, the Clowes panel calls to mind Bosch’s Christ Mocked in London (fig. 2). The latter painting’s toned-down violence and psychological ambivalence undermines its narrative clarity and evokes in the viewer an uneasy sense of complicity. As Peter Parshall has argued, “The message of the painting is interrogative
placeholder
Figure 2: Hieronymus Bosch (Netherlandish, about 1450–1516), Christ Mocked (The Crowning with Thorns), about 1510, oil on oak, 29-1/16 × 23-15/64 in. The National Gallery, London, Bought, 1934, NG4744. 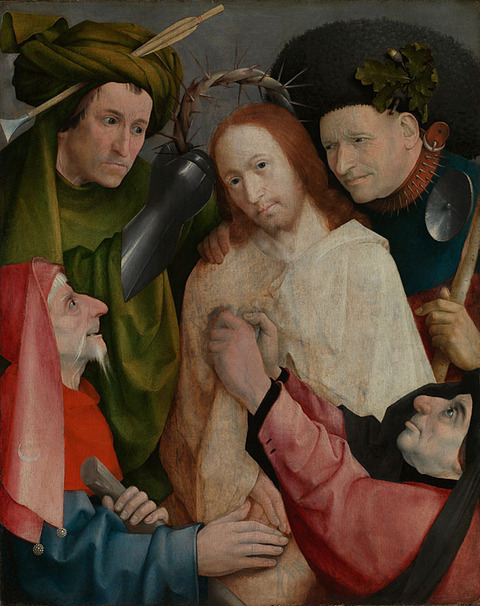 Figure 2: Hieronymus Bosch (Netherlandish, about 1450–1516), Christ Mocked (The Crowning with Thorns), about 1510, oil on oak, 29-1/16 × 23-15/64 in. The National Gallery, London, Bought, 1934, NG4744.
4
Link Copied
rather than declarative, no longer about the past, about memory, but rather about the continually unstable present."1 Eyes closed, the Clowes Christ does not appear to interrogate the viewer. Nonetheless, the viewer’s proximity to the mob means that one may be lured into their commotion as though participating in it in the “unstable present.”
5
Link Copied
The Clowes Ecce Homo and a painting in the John G. Johnson Collection in the Philadelphia Museum of Art (fig. 3) are near identical versions of the same composition. The two paintings have the same width, although the Clowes panel is 2-3/4 inches longer, as it contains a painted parapet that is not present in the Johnson panel. A column right behind Christ’s nearby tormentor also exists only in the Clowes panel. Although absent in the Johnson painting’s current state, an extra column was, in fact, once part of the composition. During a restoration carried out in 1938, the column, covering a split in the middle of the panel, was removed.2
placeholder
Figure 3: Follower of Hieronymus Bosch, Ecce Homo, after 1557, oil and gold on panel, 20-1/2 × 21-1/4 in. Philadelphia Museum of Art, John G. Johnson Collection, 1917, Cat. 352. 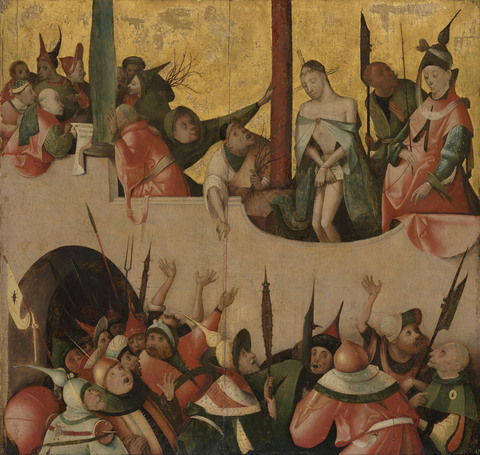 Figure 3: Follower of Hieronymus Bosch, Ecce Homo, after 1557, oil and gold on panel, 20-1/2 × 21-1/4 in. Philadelphia Museum of Art, John G. Johnson Collection, 1917, Cat. 352.
6
Link Copied
Hanns Swarzenski, crediting the identification to Seymour Slive, was the first to note compositional similarities between the Johnson panel and the upper-left corner of a drawing in the collection of the Crocker Art Museum depicting Christ carrying the cross. The drawing also includes scenes of the mocking of Christ, the suicide of Judas, and the mourning Virgin and St. John the Evangelist in its background (fig. 4).3 The Crocker drawing supports Swarzenski’s assertion that the Johnson panel is a fragment of a larger composition, a claim corroborated by Charles de Tolnay’s observation that the panel’s right edge is irregularly cut.4 The Crocker drawing, in which the background and the foreground are separated not by architecture but by a simple arched line suggesting an undulating landscape, also potentially explains the absence of a parapet in the Johnson panel. For this reason, Charles de Tolnay and Mia Cinotti argue that the Clowes painting is a copy after the Johnson panel, because, with the addition of the parapet, it treats the mocking scene as a complete whole.5 Cinotti further argues that the Clowes panel cannot be the top-left corner of a larger composition, because, in its lack of perspectival rendering, the arched doorway through which the soldiers emerge shows that the painting is not a fragmentary corner viewed obliquely. However, since the doorway is, in fact, rendered in perspective, the observation is incorrect.6
placeholder
Figure 4: Circle of Hieronymus Bosch (Netherlandish, about 1450–1516), Christ Carrying the Cross, n.d., pen and brown ink, black chalk, white chalk on buff laid paper, 9-2/5 × 7-1/2 in. Crocker Art Museum, Sacramento, E.B. Crocker Collection, Inv. 1871.126. 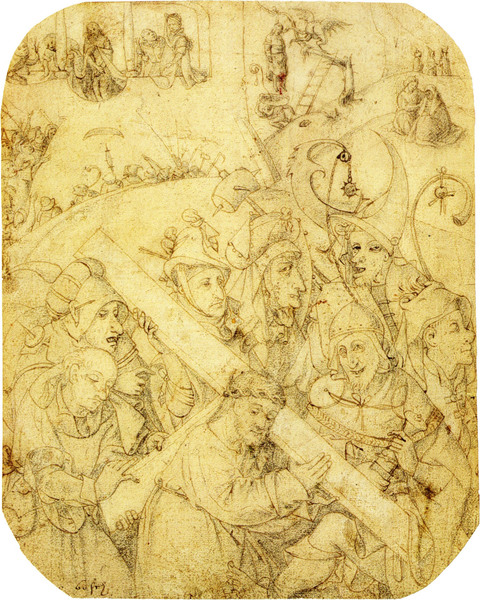 Figure 4: Circle of Hieronymus Bosch (Netherlandish, about 1450–1516), Christ Carrying the Cross, n.d., pen and brown ink, black chalk, white chalk on buff laid paper, 9-2/5 × 7-1/2 in. Crocker Art Museum, Sacramento, E.B. Crocker Collection, Inv. 1871.126.
7
Link Copied
Based on connoisseurship, scholars of the early twentieth century held different opinions on the attribution of the Johnson panel.7 Meanwhile, dendrochronological analysis confirms that the Johnson panel was created after 1557, while the Clowes panel could have been produced any time after 1504—that is, within Bosch’s lifetime.8
8
Link Copied
Both the Clowes and the Johnson panels are stylistically removed from the Frankfurt Ecce Homo, Bosch’s foremost painting on this subject. Instead, they are, as P. Gerlach has observed, akin to the work St. James of Compostela and Hermogenes, a Boschian panel in the Musée des Beaux Arts de Valenciennes (fig. 5).9 Note the similar facial features of Hermogenes and the bearded soldier in the lower-right corner of the Clowes and the Johnson panels. The onion-shaped headgear worn by Hermogenes also echoes the pointy helmet of two soldiers in the foreground of both. The fan-shaped hat of the conspiring Philetus, depicted to the left of Hermogenes, is also reminiscent of the headdress of the scornful priest in the upper-left corner of the Ecce Homo compositions. All three paintings, moreover, include a column displaying extreme entasis.
placeholder
Figure 5: Follower of Hieronymus Bosch, The Sorcerer Hermogenes and the devils; in the background St. James the Great, about 1550–1575, oil on panel, 24-13/32 × 16-9/64 in. Musée des Beaux Arts de Valenciennes, Valenciennes, inv./cat.nr 176. Photo Credit: BD/RKD - ONS/Photo-archive M.J. Friedländer. 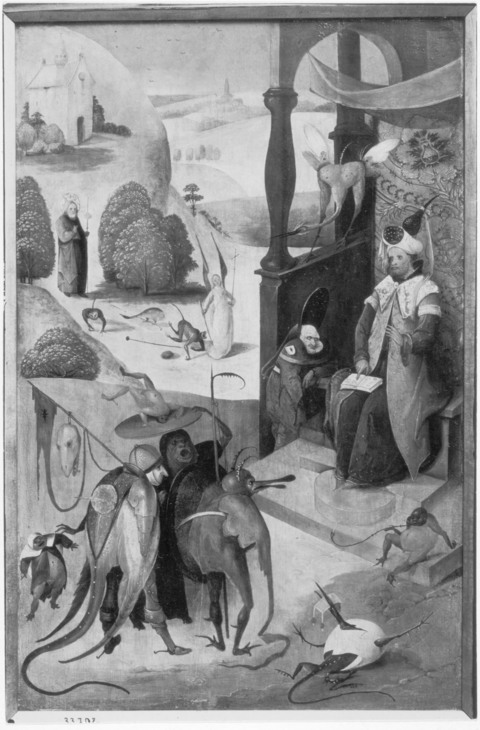 Figure 5: Follower of Hieronymus Bosch, The Sorcerer Hermogenes and the devils; in the background St. James the Great, about 1550–1575, oil on panel, 24-13/32 × 16-9/64 in. Musée des Beaux Arts de Valenciennes, Valenciennes, inv./cat.nr 176. Photo Credit: BD/RKD - ONS/Photo-archive M.J. Friedländer.
9
Link Copied
Frédérique Elsig, moreover, points out that the demon reclining on the stairs at the feet of Hermogenes may hold the key to determining the work’s date. Cheeks puffed up, the demon appears to both smoke a pipe and blow a wind instrument (reminiscent of the figure that blows a shawm in the hell scene of the Garden of Earthly Delights).10 Given that smoking was not popularized in Europe until 1560, when Jean Nicot introduced tobacco to France, the painting would have likely been created after 1560 for it to include a pipe-smoking monster.11 The remarkable stylistic similarity between the Valenciennes Hermogenes and the Johnson Ecce Homo means that both would have likely been created by the same artist or workshop, a connection supported by the dendrochronological finding of the Johnson panel. Gerlach, treating the scorpion-like insect that appears twice in the Johnson painting—on a banner and on a badge worn by a soldier to the right—and on Philetus’s shoulder in the Valenciennes painting as a signature, attributes both works to a “Master of the Insect” (“Meester van het insekt”).12 Gerlach also identifies several other paintings that bare the same “signature,” including The Extraction of the Stone of Madness in the Museo del Prado (fig. 6), a Conjurer in a Californian private collection,13 and a pair of trimmed wings depicting Paradise and Hell in a New York private collection.14 He, however, did not mention the Clowes panel in his study. Despite sharing the same “signature,” the Clowes and Johnson panels depict an event effusing fantastic excitement much removed from the Prado Extraction of the Stone of Madness. Indeed, as Elsig argues, the caricatural morphology of the Valenciennes panel (and, by association, the Clowes and Johnson panels) was more in line with figures in works of Pieter Bruegel the Elder and Pieter van der Heyden.15 While the dendrochronological analysis suggests that the Clowes painting could have been created from 1504 onward, the caricatural treatment of the subject matter likely pushes it to the second half of the sixteenth century, that is, as contemporary of the Johnson and Valenciennes paintings.
placeholder
Figure 6: Hieronymus Bosch (Netherlandish, about 1450–1516), The Extraction of the Stone of Madness, 1501–1505, oil on oak panel, 19-3/32 × 13-37/64 in. Museo del Prado, Madrid, P002056. 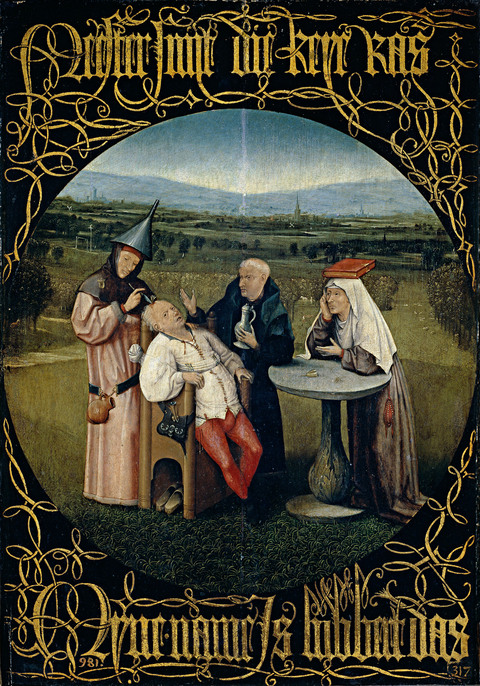 Detroit Institute of Arts, Masterpieces of Art from European and American Collections: European Paintings from the Two World’s Fair of 1939, no. 3;

John Herron Art Museum, Indianapolis, 1950, Holbein and His Contemporaries, no. 7;

Charles de Tolnay, “The Paintings of Hieronymus Bosch in the Philadelphia Museum of Art,” Art International 7, no. 4 (1963): 27;

A. Ian Fraser, A Catalogue of the Clowes Collection (Indianapolis: Indianapolis Museum of Art, 1973), 104–5;

Anthony F. Janson and A. Ian Fraser, Handbook of European and American Paintings to 1945. (Indianapolis: Indianapolis Museum of Art, 1981);