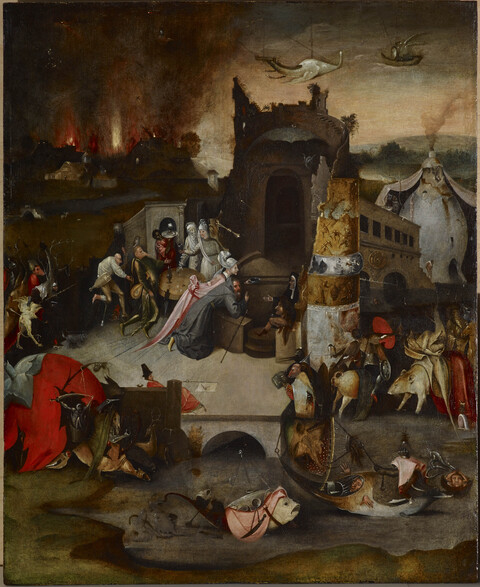 1
Link Copied
This painting is a copy of the central panel of Hieronymus Bosch’s Temptation of St. Anthony triptych in the Museu Nacional de Arte Antiga in Lisbon (fig. 1), created by a follower of the artist. The Clowes painting is approximately one-quarter the size of and narrower than the original central panel. It includes all the major figures of the Lisbon painting, although their depiction is generally simplified. Some marginal figures are also omitted.1
placeholder
Figure 1: Hieronymus Bosch (Netherlandish, 1450–1516), Temptation of St. Anthony, about 1500, oil on oak, 51-49/64 × 46-27/32 in. (central panel), 51-49/64 × 20-55/64 in. (side panels). Museu Nacional de Art Antiga, Lisbon, Inv. 1498 Pint. 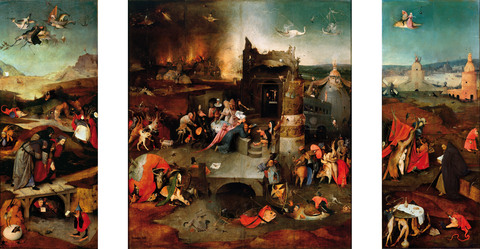 Figure 1: Hieronymus Bosch (Netherlandish, 1450–1516), Temptation of St. Anthony, about 1500, oil on oak, 51-49/64 × 46-27/32 in. (central panel), 51-49/64 × 20-55/64 in. (side panels). Museu Nacional de Art Antiga, Lisbon, Inv. 1498 Pint.
2
Link Copied
In the Clowes panel, St. Anthony kneels by the ruins of tower-like building, which likely alludes to the fort that he elected to be the site of his hermitage. Surrounding him is a throng of sinister figures carrying out parodies of Christianity: a sham priest administers a satanic mass around the table next to Anthony; echoing that sacrilegious act, a woman whose long dress appears more like a tail offers a bowl of potion to a nun and a mishappen man; a group of demons, of which one is disguised as a cleric, read a book at the edge of the floating platform; a man and a rodent-riding hag, holding in her arms a swaddled infant, travesty the Holy Family’s flight into Egypt. Anthony, making a sign of benediction, appears unaffected by his terrifying surroundings. The ascetic composure with which he withstands demonic temptations is in keeping with the accounts of his legend told in Athanasius ’s Vita Antonii and later in Jacobus de Voragine’s Legenda Aurea.
3
Link Copied
The original panel in Lisbon shows Anthony looking calmly at the viewer. His gesture directs the viewer’s wandering gaze to the chapel inside the dilapidated tower, where Christ, standing next to an altar and a crucifix, blesses the saint with an echoing gesture. The diminutive presence of the chapel means that the viewer must navigate the terrain of demonic distractions and overcome them before finding spiritual reward in the presence of Christ. Searching, easily misled, but ultimately reaching the destination, such a visual journey becomes itself a metaphor of Anthony’s perseverance empowered by his faith. This message of spiritual steadfastness, brokered by viewership, would have been particularly salient to the first audience of the triptych, as the work may have been commissioned for a monastery hospital, where Antonine monks attended sick and dying patients.2
4
Link Copied
Curiously, though, this important detail of Christ’s appearance, serving as the spiritual culmination of the triptych, is missing in the Clowes panel. The empty chapel seems to exemplify the taste of Bosch’s later admirers, who were more fascinated by Bosch’s grotesque creatures, their esoteric behaviors, and the bizarre terrains than by the religious lessons that grounded the artist’s work. On that taste, Felipe de Guevara (about 1500–1563), anxious about injuries done to Bosch’s legacy by imitators, wrote scathingly:

5
Link Copied
That which Hieronymus Bosch did with wisdom and decorum others did, and still do, without any discretion and good judgment; for having seen in Flanders how well received was this kind of painting by Hieronymus Bosch, they decided to imitate it and painted monsters and various imaginary subjects, thus giving to understand that in this alone consisted the imitation of Bosch. In this way came into being countless numbers of paintings of this kind which are signed with the name of Hieronymus Bosch but are in fact fraudulently inscribed: pictures to which he would never have thought of putting his hand but which are in reality the work of smoke and the short-sighted fools who smoked them in fireplaces in order to lend them credibility and an aged look.3

6
Link Copied
Rote repetition and outright fraud were the nature of the imitators' work.
7
Link Copied
But could the Clowes panel’s conspicuous empty chapel be the result of purposeful omission rather than careless oversight? The answer seems to lie in the Triptych of the Temptation of St. Anthony (fig. 2), a copy in the collection of the Gemäldegalerie after the Lisbon original and one that also shows an empty chapel. Given the work’s otherwise faithful adherence to the prototype, it is hard not to consider that exclusion as deliberate. As the Gemäldegalerie’s curator of early Netherlandish and German art, Stephan Kemperdick, suggests, the choice may have been made by its original owner, the Pilgram family from Protestant Nuremberg.4 (Until 1577, if not later, the triptych was in the possession of the family. Their coat of arms was painted on the exterior of the left panel, although it was only discovered in the 1870s, when a later layer of black overpaint was removed.)5 While moderate Lutherans may not have objected to the image of Christ and the crucifix, they may not have accommodated the depiction of a saint’s legend. The removal of Christ, therefore, would have allowed for a different interpretation of the scene, in which Anthony is not a mystic hermit but the protagonist of a grisly fairytale.6 An example to complement this point would be a copy in São Paulo (fig. 3). This panel, first acquired by the convent of Santa Sofia near Seville (serving therefore a Catholic audience), includes Christ in the chapel.7 Given the sectarian implications established by the Berlin and São Paulo copies, one may deduce that the Clowes painting was designed to suit the needs of a Protestant client.
placeholder
Figure 2: After Hieronymus Bosch, Triptych of the Temptation of St. Anthony (central panel), about 1560–1570, oil on oak panel, 29-29/64 × 32-3/32 in. Gemäldegalerie, Staatliche Museen, Berlin, Inv. 1198. Photo: bpk Bildagentur / Staatliche Museen, Berlin / Christoph Schmidt / Art Resource, NY. 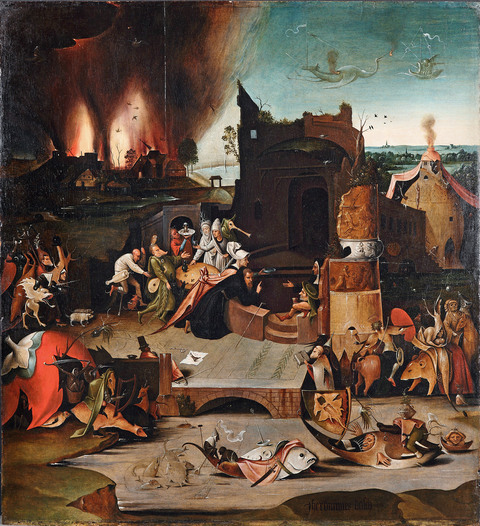 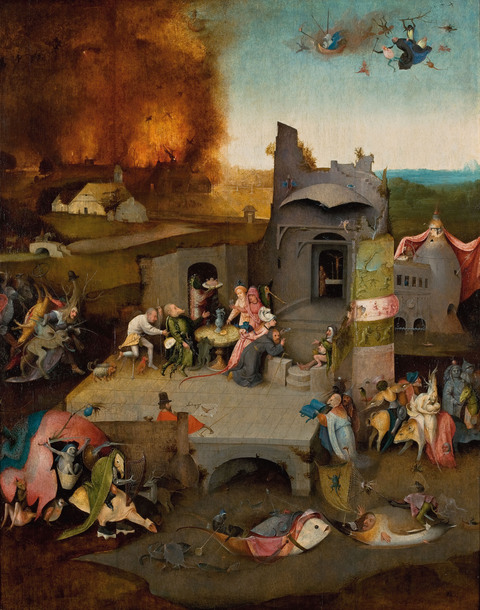 Figure 3: Hieronymus Bosch (Netherlandish, 1450–1516), Temptations of St. Anthony, about 1500, oil on wood, 50-25/64 × 39-49/64 × 25/32 in. Photo: João Musa. Museu de Art de São Paulo, São Paulo, MASP.00179.
8
Link Copied
The demand for Bosch’s paintings fueled an enormous trade in imitations and forgeries from the middle of the sixteenth to the beginning of the seventeenth century.8 Antwerp became the market leader for such works, having transformed art selling from an annual trade fair into a year-round business.9 Major Bosch imitators, including Jan Mandijn (about 1500–about 1559) and Pieter Huys (about 1520–about 1584), made their name with spin-offs of Bosch’s compositions, creating a repertoire of hybrid monsters as well as judgment and temptation scenes. Lesser-known artists copied not only Bosch but also Mandijn and Huys, creating what University of Pennsylvania emeritus professor Larry Silver calls a “Boschiana” in Antwerp after the middle of the sixteenth century.10
9
Link Copied
The Spanish king Philip II (1527–1598) was a major participant in this market. Between 1574 and 1593, the king sent six shipments of artworks to El Escorial for the decoration of the palace. The first contained a triptych as well as two single panels on St. Anthony.11 According to the 1564 and 1614 inventories of the Royal Palace of El Pardo, near Madrid, Philip likely owned four paintings—one oil on panel, two tempera on canvas, and one “fresco” on canvas—of which St. Anthony was the subject matter.12 The 1636 inventory of the Alcázar of Madrid, another royal palace, lists four paintings on the Temptation of St. Anthony.13 The sheer number of works attests to the popularity of the subject. Given the context of sixteenth-century Spain, the lesson of Anthony’s legend—the survival of Christian belief under demonic assault—may suggest that the topic provided a timely metaphor for the spiritual anxiety, shared by all social classes, in an age of fierce religious conflict.
10
Link Copied
In addition to surviving copies and inventory records, evidence of another practice provides insight into the Bosch craze of the sixteenth century. Infrared reflectography, a technology that enables examination of the underlying layers of paintings, has revealed that several Bosch copies were painted over other compositions.14 As Netherlandish art specialist Molly Faries suggests, this recycling attests to Bosch’s continuing marketability in the sixteenth century.15 Indeed, as art historian and museum director Peter van den Brink argues, why would one cover up a finished work if one could not cash in on a Boschian painting?16 The Clowes painting is an example of this practice.
11
Link Copied
Under the depiction of St. Anthony’s temptation is a bust-length portrait of a man (fig. 4). He wears a small beret, fashionable in the early sixteenth-century Southern Low Countries, and carries a book under his right arm.17 Holding what appears to be a pair of gloves in his left hand, he has in his right hand a letter (fig. 5), which reads: “Dem Erssamen und/ weijssenn Heronymus/Sulzer zu anntorff” (To the honorable and wise Heronymus Sulzer at Antwerp).18 Another “Anntorff,” accompanied by a hook-like sign that is likely a trademark, appears in the lower-right corner of the letter.19 The sitter in the hidden picture can thus be identified with fair certainty as Hieronymus Sulzer (1518–1556), a merchant from the German city of Augsburg.20 The Sulzer family owned a trading business and invested in land-reclamation projects in the Low Countries from the early years of the sixteenth century. No extant record shows Hieronymus ever in Antwerp, but Augsburger merchant families customarily sent their teenage sons abroad for commercial education. He was probably in the Netherlands in the early 1530s, as genealogical records indicate that he was back in Augsburg in 1540.21
placeholder
Figure 4: Portrait underneath Clowes Temptation of St. Anthony, X-radiograph, overexposed. Indianapolis Museum of Art at Newfields, The Clowes Collection, 2020.1. 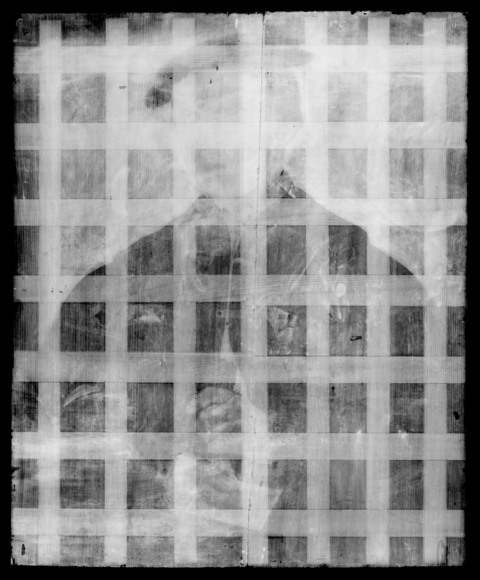 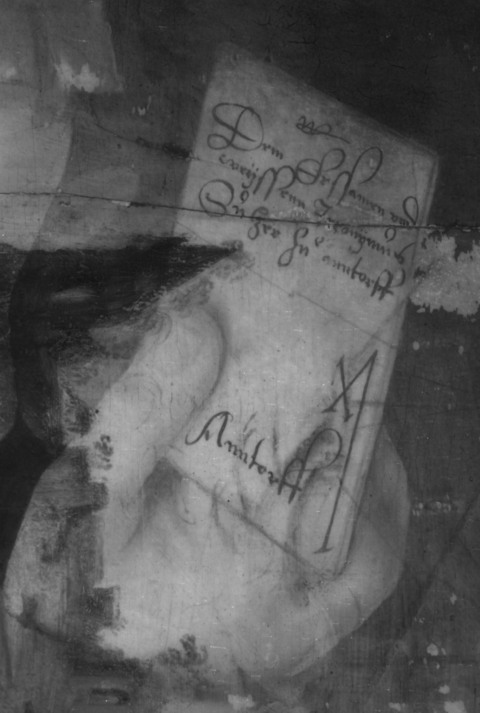 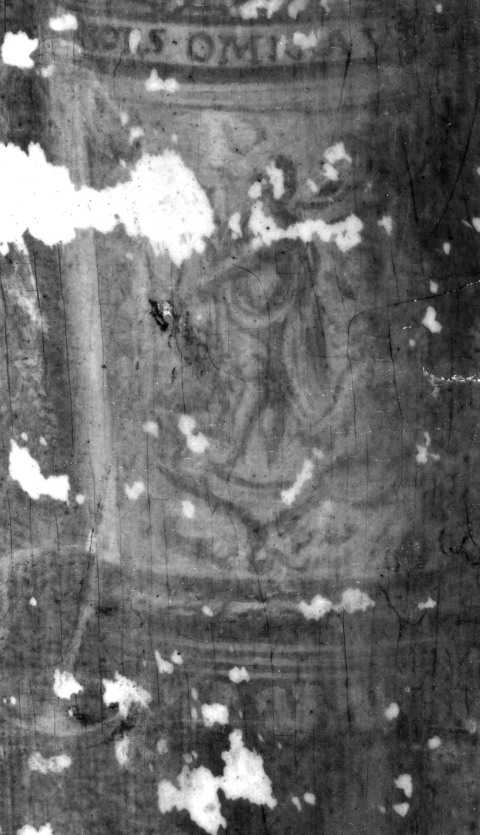 Figure 6: Detail of portrait underneath Clowes Temptation of St. Anthony showing spine of a book, infrared reflectogram. Indianapolis Museum of Art at Newfields, The Clowes Collection, 2020.1.
13
Link Copied
The discovery of the hidden portrait also proves that the Clowes painting is not a modern forgery.22 Before provenance research traced the painting’s ownership to Gustav von Gerhardt, who was in possession of this painting until 1911, there had been concern that the dealer, Ivan Podgoursky, may have sold G.H.A. Clowes a fake work in 1944. While examination of the pigments later proved otherwise, the underlying portrait—a genuine sixteenth-century work—provided further assurance that the painting was authentic.23 The Clowes painting, transformed from a portrait to a Boschian copy, is an outstanding testimony of Bosch’s vast posthumous popularity in the sixteenth century.

Given to the Indianapolis Museum of Art at Newfields, in 2020.

Addison Gallery of American Art, Phillips Academy, Andover, MA, 1954, Shadow and Substance: The Art Film and Its Sources, no. 7;

Indianapolis Museum of Art at the Newfields, Indianapolis, 2017–2018, On the Flip Side: Secrets on the Backs of Paintings;

Indianapolis Museum of Art at the Newfields, Indianapolis, 2019, Life and Legacy: Portraits from the Clowes Collection.

Molly A. Faries et al., “The Recently Discovered Underdrawings of the Master of the Saint Ursula Legend’s Triptych of the Nativity,” Bulletin of the Detroit Institute of Arts 62, no. 4 (1987): 19n16;

of Re-use of Panels in Painting after Hieronymus Bosch,” in Le Dessin Sous-jacent et la

Peter Klein, “Dendrochronological Analysis of Works by Hieronymus Bosch and His Followers,”

Peter van den Brink, “The Art of Copying: Copying and Serial Production of Paintings in the Low

Countries in the Sixteenth and Seventeenth Centuries,” in Bruegel Enterprises, ed. Peter