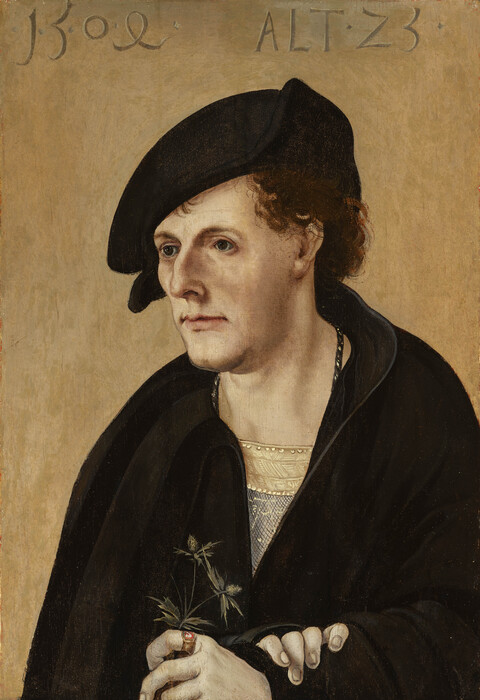 Portrait of a Young Man

Pale yellow monogram “A” on the sitter’s shirt

1
Link Copied
An early work by Hans Schäufelein the Elder, this portrait depicts a young man in three-quarter view holding a thistle-like plant. An inscription, “1504 ALT 25,” imitative of stonework, states the sitter’s age at the time this likeness was painted. The portrait may have commemorated a special event given the specification of the man’s age and the plant that he holds, which is rich in symbolic meaning. Erwin Panofsky, invoking the 1493 self-portrait of Albrecht Dürer (1471–1528) in which the painter holds a similar thistle (fig. 1), suggested the occasion to be a betrothal.1 If so, the letter “A” on the shirt may indicate the initial of the bride.2
placeholder
Figure 1: Albrecht Dürer (German, 1471–1528), Portrait of the Artist Holding a Thistle, 1493, oil on vellum (transferred to canvas about 1840), 22-1/20 × 17-8/25 in. Musée du Louvre, Paris, R.F. 2382. 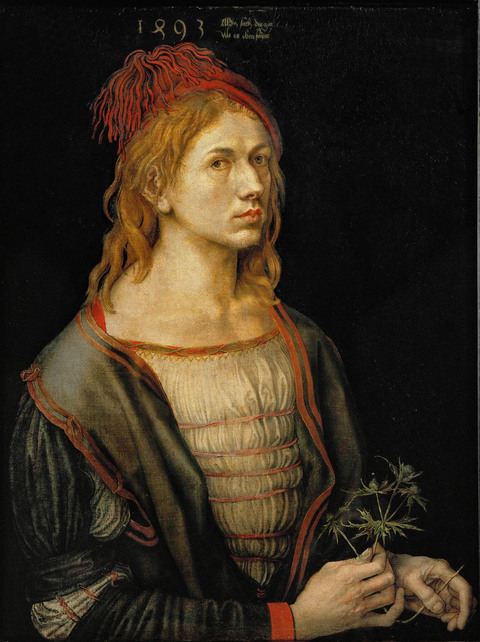 Figure 1: Albrecht Dürer (German, 1471–1528), Portrait of the Artist Holding a Thistle, 1493, oil on vellum (transferred to canvas about 1840), 22-1/20 × 17-8/25 in. Musée du Louvre, Paris, R.F. 2382.
2
Link Copied
The portrait had been attributed to Dürer until 1983, when the German art historian Kurt Löcher proposed Schäufelein as its author after a visit to the Clowes Collection.3 In an essay published in 1934/1936, the Austrian art historian and museum director Gustav Glück had described it as a newly discovered work of Dürer, citing the figural elegance, lively expression, and careful modeling characteristic of that artist’s style.4 William Suida agreed, noting the “stylistic peculiarities in the head, in the hands, [and] in the draping."5 Hans Tietze and Erica Tietze-Conrat, in contrast, suggested the painting was by Hans Baldung Grien (1484/1485–1545).6 Noting the “Upper Rhenish rather than Franconian characteristics,” Panofsky, too, acknowledged the portrait’s resemblance to Baldung’s work.7 Löcher focused on the sitter’s features, especially the nuanced treatment of the eyes and the columnar neck, which was to reappear in a later so-called Melancholiker (melancholic) depicting a wistful young man (fig. 2).8
placeholder
Figure 2: Hans Schäufelein the Elder (German, about 1480–1540), Melancholiker (sog. Jünglingskopf), 1511, oil on panel, 12-13/32 × 8-35/64 in. Gemäldegalerie, Kunsthistorisches Museum Wien, Vienna, 829. 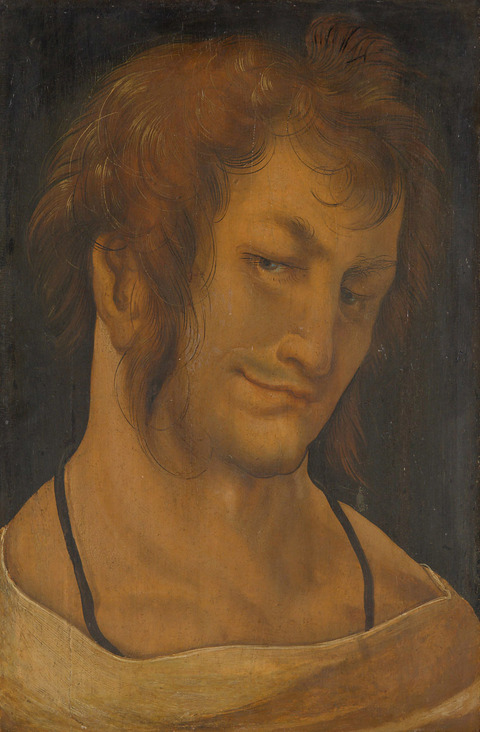 Figure 2: Hans Schäufelein the Elder (German, about 1480–1540), Melancholiker (sog. Jünglingskopf), 1511, oil on panel, 12-13/32 × 8-35/64 in. Gemäldegalerie, Kunsthistorisches Museum Wien, Vienna, 829.
3
Link Copied
Dürer and Schäufelein had similar styles and often collaborated. Dürer was not just Schäufelein’s mentor; he regarded the latter’s work highly and even drew inspirations from his woodcuts.9 Schäufelein was entrusted with the management of Dürer’s studio and prominent projects, such as the execution of the central panel of the Ober Sankt Veit altarpiece (Vienna, Diözesanmuseum), commissioned by Elector Frederick the Wise of Saxony (1463–1525) for the Schlosskirche at Wittenberg.10 Given their mutual influences on each other, it is not surprising that several paintings by Schäufelein had been tentatively attributed to Dürer, including two other portraits of men, one in Washington, DC, and one in Warsaw (figs. 3 and 4).11 Both paintings are analogous to the Clowes portrait. The pensive glance and the prominent chin of the Washington sitter are echoed in the features of the Clowes sitter. The Warsaw sitter resembles the Clowes sitter even more closely; both are characterized by an undulating contour, a stout chin, and deep-set eyes under arched brows.
placeholder
Figure 3: Hans Schäufelein the Elder (German, about 1480–1540), Portrait of a Man, about 1507, oil on panel, 15-11/1 6 in × 12-11/16 in. National Gallery of Art, Washington, DC, 1937.1.66 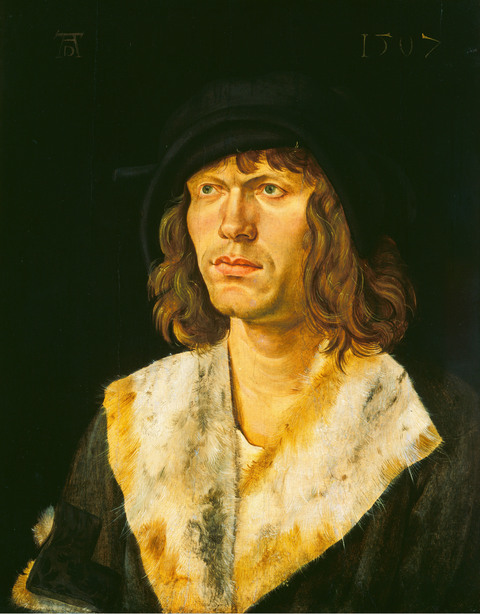 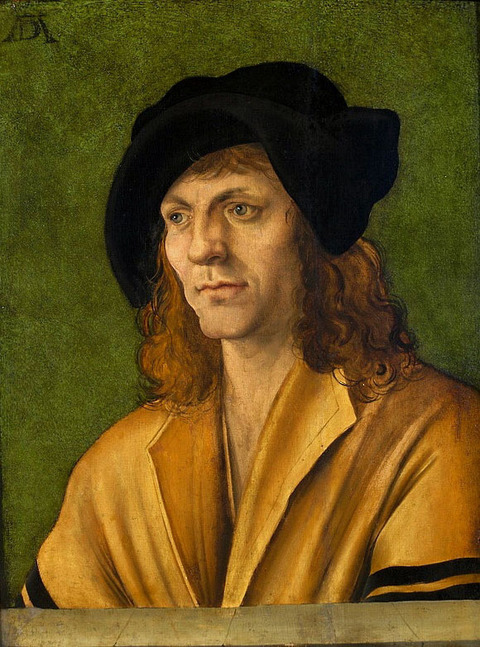 Figure 4: Hans Schäufelein the Elder (German, about 1480–1540), Portrait of a Man in a Yellow Jerkin, about 1507, oil on panel, 16-9/64 × 12-19/32 in. Muzeum Narodowe, Warsaw, M.Ob.297 MNW.
4
Link Copied
Attempts have been made to identify the subject. Suida, who regarded the portrait as a work of Dürer, turned to the Tucher family of Nuremberg, several prominent members of which were portrayed by that artist. According to the Tucher genealogy, a Helena, married to Christopher Scheurl, gave birth to a boy, Christopher, in 1481. The younger Christopher later became senator of Nuremberg and counsel to the emperor. His stature and age at 1504—that is, 23—make him a viable candidate for the sitter, according to Suida, who read the inscription as “1504 ALT 23,” not “1504 ALT 25."12 More recently, Dieter Wuttke, reading the inscription in the same way, identified the man as Pangratz Bernhaubt Schwenter the Elder (1481–1555), a Nuremberg mercenary and humanist. The “A” on the shirt, Wuttke suggests, cannot be the initial of the betrothed, who was a Margaret, but rather stands for “Arctocephas,” which is the Greek translation of Bernhaubt (literally, “bear’s head”).13
5
Link Copied
The prickly plant has been identified as Eryngium—Männertreu in German—a common European flower traditionally associated with fidelity. Pliny claimed the plant was an aphrodisiac, and Goethe regarded it as a token of marital love.14 In Dürer’s 1493 self-portrait, the artist holds just such a flower. Goethe, who only knew the painting in a copy, deemed the plant a “significant” choice for the portrait, in which Dürer painted his “youthful face."15 The association of the plant with love took hold in later scholarship, which addressed the painting’s inscription unknown to Goethe—“Myj sach die gat Als es oben schtat” (My affairs fare as ordained from above)—and Dürer’s impending marriage to Agnes Frey.16 Such interpretations are particularly germane to the Clowes portrait, of which the attributes—the flower, the inscription, the embroidered initial—seem to suggest a marital bond.17
6
Link Copied
Shira Brisman, however, reconsidered the meaning of the plant, arguing that it would have been known to Dürer not as Männertreu but as Sternkraut, which, in its resemblance to shining stars, connoted “an earthly manifestation of the supernatural."18 Thus, the implication of prenuptial sentiments is no longer valid; instead, the interplay between the celestial talismanic plant and the inscription referring to the “oben” reflects a rumination on a fate ordained from above. The plant held by the Clowes sitter would likewise have been known to him and his contemporaries as Sternkraut; Brisman pointed out that the name Eryngium had not been associated with the thistle until the 1530s, when Leonhart Fuchs (1501–1566), the pioneering botanist and physician, resolved the confusion.19 Its meaning in the Clowes portrait, which specifies little more than the sitter’s age, would have been more speculative than that of Dürer’s self-portrait. Nonetheless, any theory will be circumscribed by the reading of contemporaneous works in which the plant is represented. Consider, as an example, Dürer’s engraving of the allegorical figure of Fortuna (fig. 5). Standing on a globe and poised over a staff, Fortuna holds the plant in her left hand. The fickleness of fortune comes through in the precarious stability of the globe, and the plant, in its invocation of the supernatural, would have enriched the engraving’s theme of fortuity, luck, and fate. In the Clowes portrait, both a demonstration of the sitter’s fidelity and a representation of his reflection on fate would have been appropriate. While the exact motive remains unknown, one may reasonably assume—in conjunction with the sitter’s pensive look—that the portrait depicts a moment of introspection.
placeholder
Figure 5: Albrecht Dürer (German, 1471–1528), The Little Fortune, 1495–1496, engraving, 4-5/8 in × 2-5/8 in. The Metropolitan Museum of Art, New York, Fletcher Fund, 19.73.90. 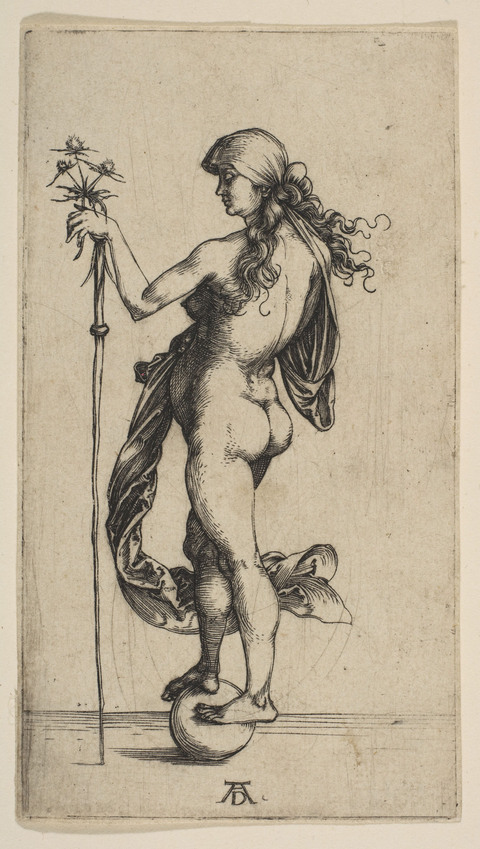 (E. and A. Silberman Galleries, Vienna and New York);21

John Herron Art Museum, Indianapolis, 1950, Holbein and His Contemporaries, no. 24;

Indianapolis Museum of Art at Newfields, 2019, Life and Legacy: Portraits from the Clowes Collection;

The original wood panel has been thinned to approximately 1 millimeter in depth and is adhered to a solid composite/compressed wood board backed with vertically grained veneer and a seven-member wood cradle. The panel’s original verso and edges were planed, leveled, and smoothed in preparation for the addition of the secondary support components. This structural intervention was most likely completed in the early 1930s, prior to the sale of the painting to George H.A. Clowes. The original wood plank shows extreme deterioration and damage, while the auxiliary support system offers a secure and planar support for the rigid paint layer. X-radiographs reveal wood splints filling two splits along the conjunctions of the original planks and at the central crack. What remains of the original panel appears too degraded and thin to independently support the picture layer, and the painting relies on the strength provided by the layered auxiliary support.

The panel appears to have been prepared for painting with a thin layer of glue-based off-white ground that would have likely been applied by a brush and then scraped to achieve a smooth and level surface free of texture. A warm-toned imprimatura appears to cover the entire picture plane, and prominent horizontal brushwork visible through abraded paint layers indicates that it was applied with a coarse bristled brush. The ground is extremely thin, allowing the texture of the wood grain to remain visible under specular and raking illumination.

The preliminary stage in the creation of this painting includes the execution of an underdrawing using a plant-based charcoal medium. Close examination of the sitter’s chin shows that its shape was slightly altered and extended in the painted layers from cleft to square; the black paint of the sitter’s cloak appears in the originally established contour of the chin. The painting is heavily overpainted, and differences between pigments applied by artist and restorer are difficult to discern. Nonetheless, the artist appears to have used a limited color palette consisting of red, yellow, white, black, blue, and brown. The use of blue to accent the jewel in the sitter’s ring is possible, yet multiple applications of overpaint have obscured the original material.

Microscopic islands of red paint throughout the background indicate that the portrait background was at one time overpainted in red. The very red paint extends over edges of the figure and is present in age cracks and old losses, indicating its use a later alteration. (A treatment record detailing the paint removal has not been preserved.) On the abraded surface are multiple campaigns of overpaint, some of which match well with surrounding colors, while others have discolored. Although the paint layer has sustained extensive damage, cohesion between and within layers appears secure. Horizontal striations in the sitter’s face appear to result from exposed imprimatura, which shows through abraded paint.