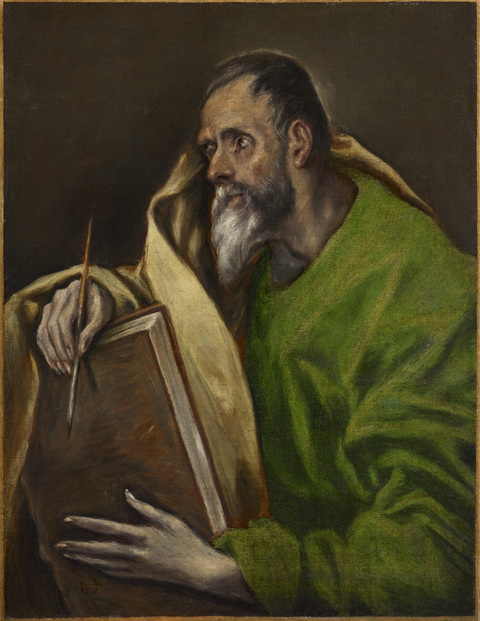 1
Link Copied
In the last decade of his career, El Greco and his workshop created at least six sets of thirteen paintings each depicting Christ and the twelve apostles, known in Spanish as “Apostolados.” Three of these series are complete: one in the Cathedral of Toledo; one in the Museo del Greco in Toledo; and one in the Museo de Bellas Artes de Asturias in Oviedo. Three other series are incomplete: the so-called Almadrones series, the Arteche series, and the Henke series.1 No other series are known, but as individual paintings of saints do appear on the market from time to time, it is possible that other “Apostolados,” since dispersed, also existed.
2
Link Copied
The Clowes paintings belong to the Almadrones series, named for the village Almadrones (Guadalajara) where the three canvases, along with six others, hung in the parish church until the Spanish Civil War (1936–1939). At that time, they were removed and taken to the fort of Guadalajara, where members of the army “restored” them.2 During a visit to the fort, the Marquis of Lozoya, director general of the Museo de Bellas Artes, identified the paintings as works by El Greco and organized their transfer to the Museo del Prado in 1942 for conservation treatment. The paintings were returned to the archbishopric of Guadalajara in 1945, which sold them. Of the nine works in the series, four were bought by the Spanish government in 1946 and are now at the Prado, one is at Los Angeles County Museum of Art, one is in the Schorr collection (UK), and the other three are the Clowes paintings.3
3
Link Copied
A purchase invoice confirms that the paintings were bought by George H.A. Clowes from the Newhouse Galleries in New York on 6 November 1952.4 Newhouse offered them to Clowes on 9 June 1952,5 but Newhouse probably had sought to obtain the paintings immediately after their return from the Prado to Almadrones. We can deduce this from a letter dated April 1952, in which he confesses that it had taken him five years to get a set of paintings of the greatest importance.6 In New York, the paintings were cleaned again by Edward Korany in June 1952.7 Although the 1952 catalogue of the Prado claimed that the canvases had been sold to the National Gallery of Art in Washington, this was never the case, as stated by the director of the Prado, Fernando Álvarez de Sotomayor, in his correspondence with George H.A. Clowes.8
4
Link Copied
In these series, El Greco depicted the apostles who accompanied Christ during his earthly ministry, apart from Judas and his replacement Matthias. Instead of those figures, he included two later apostles, St. Paul and St. Luke, or, in the El Greco Museum series, St. Paul and St. Bartholomew. In the Oviedo (fig. 1) and Arteche series, St. Luke is portrayed as a young, bearded man who holds a closed book and a brush; the painting in Toledo Cathedral (fig. 2) shows him with an open book and displaying the portrait of the Virgin Mary that he has painted. In those paintings, St. Luke does not wear a cloak and tunic like the other apostles but rather a green outfit with a stiff, white collar. The Indianapolis painting, in contrast, depicts Luke as an older man dressed in the same attire as the other figures.
placeholder
Figure 1: El Greco (Greek, 1541–1614), Saint Luke Evangelist, about 1608–1610, oil on canvas, 27-9/16 × 20-55/64 in. Photography by Javier Muñoz and Paz Pastor © Museo Nacional de Escultura, Valladolid. On deposit at the Museo de Bellas Artes de Asturias, Oviedo, CE2838. 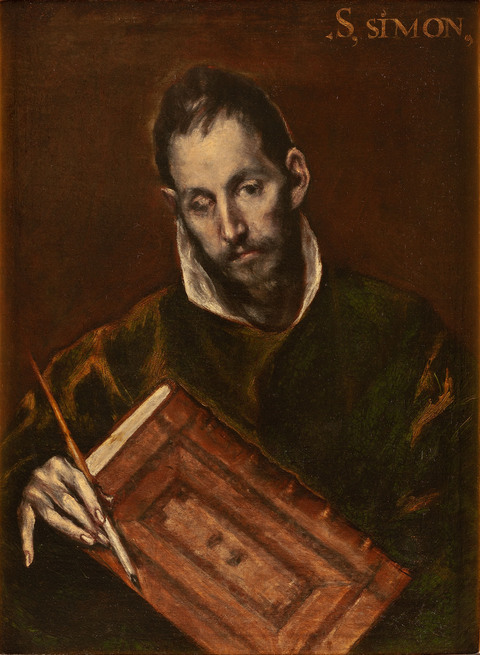 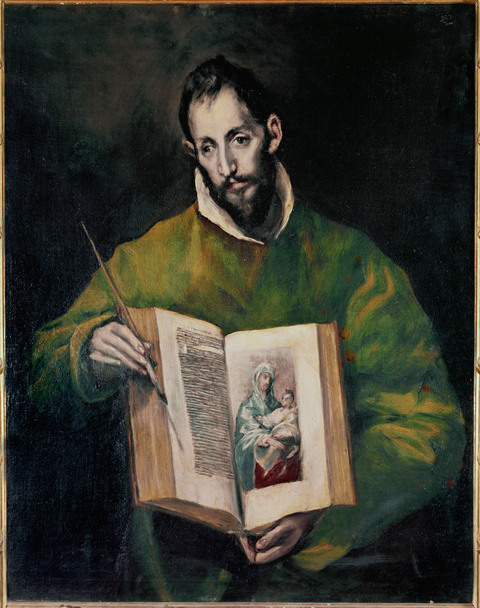 Figure 2: El Greco (Greek, 1541–1614), Saint Luke Evangelist, about 1605–1610, oil on canvas, 38-37/64 × 28-11/32 in. Photo by Erich Lessing / Art Resource, NY. Santa Iglesia Catedral Primada, Toledo, Spain.
5
Link Copied
According to legend, St. Luke is said to have painted a portrait of the Virgin Mary. An eighth-century text by Andrew of Crete is one of the first to mention him as portraitist of the Virgin, and the subject has a strong tradition in the Byzantine world in which El Greco was educated. This would explain why El Greco included St. Luke—patron saint of artists—in the series, emphasizing not only his role as painter but, more specifically, as Mary’s portraitist.
6
Link Copied
For St. Matthew, El Greco created two types of representation: in the larger examples (El Greco Museum and Cathedral) the apostle holds a book and a pen, while in the smaller series (Oviedo and Almadrones) he holds only the book. In the first group he is poised to write, while in the Clowes painting he seems absorbed in his thoughts. When discussing the Indianapolis St. Matthew, art historian Harold Wethey drew attention to the masterful depiction of the saint’s head, cloak, and tunic, which induced him to think that this was the only figure entirely by the hand of El Greco in the Almadrones series.9
7
Link Copied
There are no variations in the figure of St. Simon, who is always depicted in blue and yellow and reading the open book that he holds. As pointed out by Leticia Ruiz Gómez,10 the head of the Indianapolis St. Simon is technically very similar to the one in the Museo del Greco series, and both paintings allow the red ground to be seen clearly. Considered in the context of the series, St. Matthew and St. Simon emphasize the importance of intellectual activity in the spiritual life. St. Luke alludes to the legitimate use of images by the Church and probably also the idea of the learned painter.
8
Link Copied
In the Clowes paintings, St. Luke and St. Simon face to their right, while St. Matthew faces to his left. This provides an indication of how the paintings were hung in relation to that of Christ, which was in the center, with six apostles on either side. Yet no one since Wethey, who sought to group the apostles by the color of their clothing, their gestures, and the direction of their gazes, has been able to demonstrate convincingly how the group could have been arranged. A clue is provided by two small paintings of St. Luke and St. James, supposedly belonging to the Arteche series, which were sold in Madrid in 2005. Both are unlined and on their original canvases and stretchers. Seventeenth-century inscriptions on the stretchers read “4 derecha,” on the St. Luke, and “nº 5 çurda,” on the St. James.11 That would mean that St. Luke was meant to hang to Christ’s right side and St. James to his left. This arrangement, however, is not consistent with the direction of their gazes, which is the same in both figures.
9
Link Copied
Alfonso Pérez Sánchez and Benito Navarrete stated that the Indianapolis Matthew and Simon were mirror-images of models from other series, but they were working from reversed photographs. In fact, the Indianapolis apostles repeat the other models without variation. As pointed out by María del Carmen Garrido Pérez and Jaime García-Máiquez,12 one of the most interesting aspects of El Greco’s series of apostles is the information they convey about the working procedure of the artist and his workshop. The partially unfinished paintings in the El Greco Museum series permit us to see his method. The artist started by sketching his ideas in black over the dark orange-red background, and he used a lot of material with a high concentration of lead white to model select areas.13 This can be seen by comparing the Clowes St. Matthew with the one in the El Greco Museum (figs 3–4).14 Although the latter is clearly less finished than the one in Indianapolis, the hand holding the book is surrounded by an initial contour in black pigment with which the composition had started. The upper-right part of the apostle’s beard shows the same contours, while the lower part, in the transition between the beard and his clothing, allows the dark orange-red background to be seen. 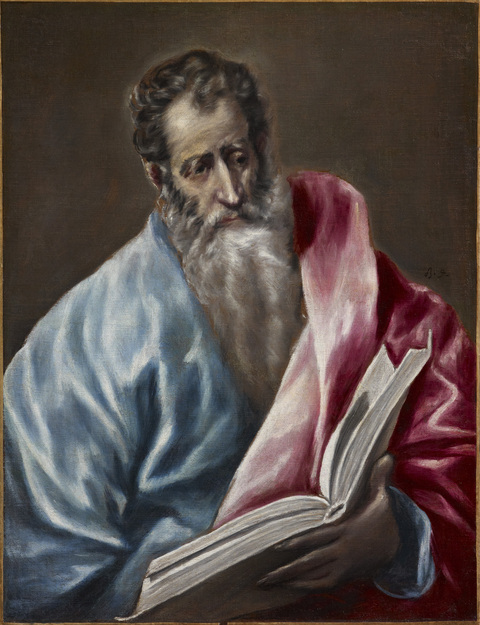 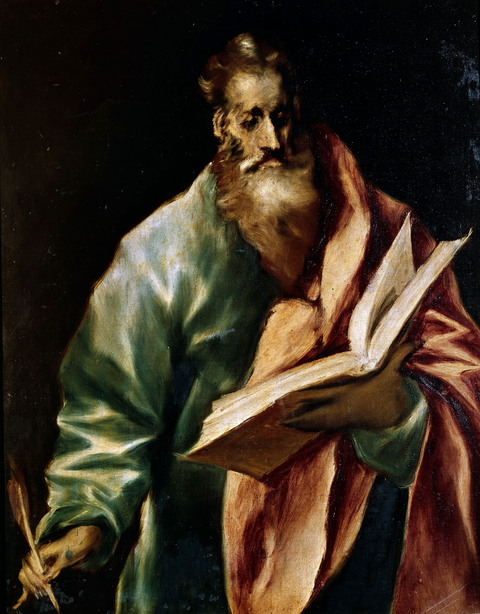 placeholder
Figure 3: El Greco and Workshop (Greek, active in Spain, 1541–1614), St. Matthew, about 1610–1614, oil on canvas, 28 1/4 × 21 5/8 in. Indianapolis Museum of Art at Newfields, The Clowes Collection, 2007.53.
Figure 4: El Greco (Greek, 1541–1614), St. Matthew, about 1610 and 1614, oil on canvas, 31-1/2 × 39-3/8 in. Photo Credit: Album / Art Resource, NY. Casa y Museo del Greco, Toledo, Spain, CE00009.
10
Link Copied
Of all the series, the one at the El Greco Museum, which shows more of the artist’s hand, is considered the best, followed by the one at the cathedral. The series share a number of characteristics: consistency in the apostles' facial features and the colors of their clothing, as well as their attributes. Also, most of the canvases bear the Greek initials “δ” and “θ,” as do the Indianapolis canvases. This may reflect El Greco’s intention to present them as paintings created in his workshop and under his supervision, if not entirely by his hand.
11
Link Copied
Another common feature is the lack of documentation regarding their patrons and their reception by contemporaries. In terms of the broader context of the creation of this sets of Apostles, however, we do know that they were created in Toledo, Spain’s spiritual capital, where, throughout the late sixteenth century, high-ranking clergy members were involved in spiritual reform promoted by the Council of Trent. According to Church tradition, the apostles were the ancestors of bishops, and intense reflection and writing on the role of the ideal bishop was taking place in the city at the time. In this context, it is hardly surprising that galleries of portraits were created of these late antique models for the early modern bishop.15

Parish church of Almadrones, Guadalajara, Spain, until 1936 or shortly thereafter;16

removed to the Fuerte of Guadalajara (former convent of San Francisco), until 1941;17

at the Museo Nacional del Prado, Madrid, for conservation treatment, 1941–1945;

restituted to the bishopric of Sigüenza in 1945, sold and legally exported in 1952;18

John Herron Art Museum, Indianapolis, IN, 1959, Paintings from the Collection of George Henry Alexander Clowes: A Memorial Exhibition, no. 34; no. 32; no. 33;

Indiana University Museum of Art, Bloomington, IN, 1962, Italian and Spanish Paintings from the Clowes Collection, nos. 29, 27, and 28;

Indianapolis Museum of Art at Newfields, 2019, Life and Legacy: Portraits from the Clowes Collection; 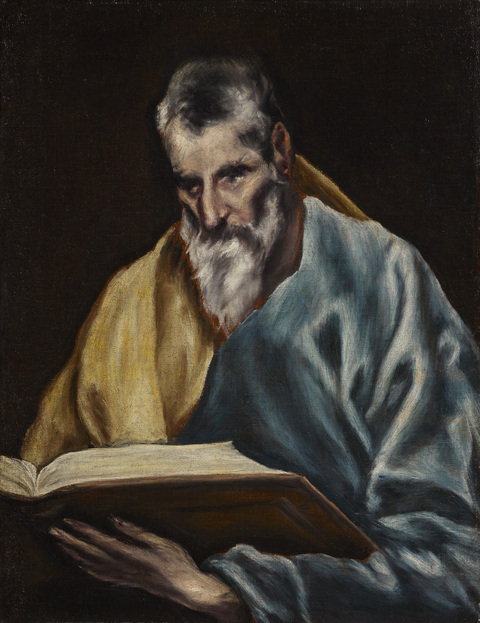