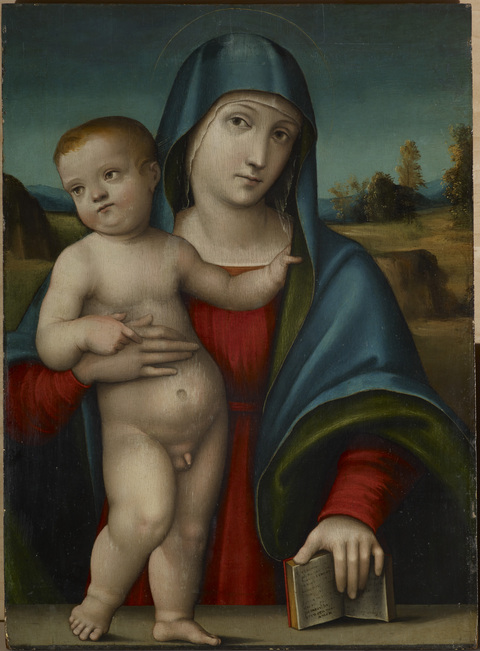 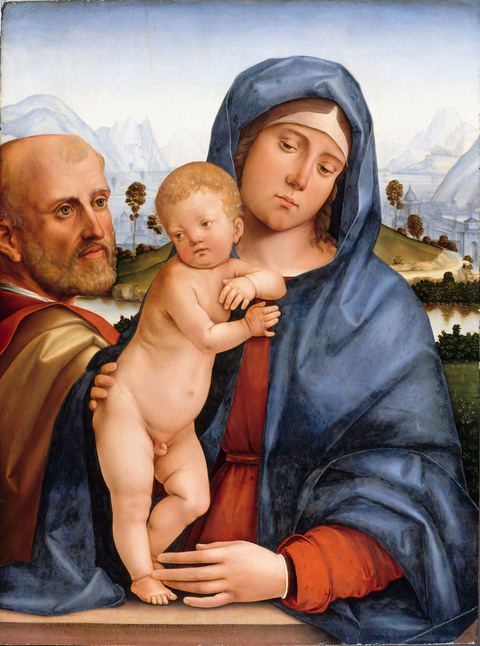 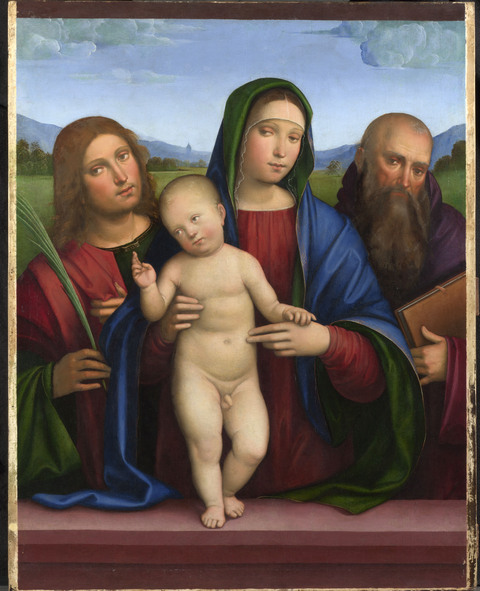 Figure 2: Francesco Francia (about 1450–1517), The Virgin and Child with Two Saints, about 1500–1510, oil on wood, 30-3/4 × 24-31/64 in. Photograph © National Gallery, London / Art Resource, NY. National Gallery, London, Bought, 1860, NG638.
10
Link Copied
Compositionally, the figures are balanced through the two gentle curves created by the body of the infant, which curves gently to the left, and the Madonna’s head, which inclines in the opposite direction. They are situated before a nondescript landscape that is typical of the work produced in the school of Francia but which lacks the nuances of the master’s hand. Francesco was known for his meticulous refinement that was sometimes compared to that of Flemish artists.21 The Clowes panel lacks the details commonly found in the landscapes of the senior Francia’s work: a steeple in the distance, a small village behind the protagonists, or the tall spindly trees that often balanced the inclined heads of the saints.
11
Link Copied
The Virgin not only supports her son, she also holds open a small, red prayer book, the pages of which are painted to appear as though gilt-edged. The volume, held upright in the Madonna’s proper left hand, is likely a book of hours or similar prayer book. Books of hours included calendars, which recorded daily and monthly observances and religious feast days. Extant samples of such prayer manuals underscore the daily, if not hourly, religious practices held in the home that were supported by domestic devotional objects. The volume is open to an inscription, heavily abraded, which, if from the Virgin’s prayer, the Magnificat, may suggest a concurrently private and communal religious activity. The Magnificat was intended to be recited in the evening, which explains the preponderance of Madonna imagery hung in bedrooms.22 Family members recited this prayer before retiring, a private experience that most Tuscan households undertook in a mass “action."23
12
Link Copied
The parapet that restricts the Virgin from entering the viewer’s space equally bars the observer from the space she inhabits. The visual trope of the Madonna supporting her son on a stone ledge remained popular in the Francia workshop under the guidance of Giacomo and Giulio. They borrowed this format from their father; however, art historian Nicosetta Roio notes that their paintings lack the subtlety and soft blending of color that Vasari ascribed to the mature work of the elder Francia.24 Both Roio and Vasari’s observations not only pinpoint Francesco’s competence with color but also his ability to gracefully transition from one form to another. Despite the initial misattribution of many of Giacomo and Giulio Francia’s paintings to their father, these smooth transitions are notably absent from many of the workshop compositions produced after Francesco’s death. Roio attests that the figures in paintings by Giacomo and Giulio exhibit immobile faces and a rigid quality.25 While this may be an apt description of much of their work, beautifully orchestrated passages of paint can be found in many of their co-creations. Giacomo and Giulio worked together on numerous compositions, each perhaps balancing the aesthetic weakness of the other. Occasionally, it is difficult to discern the separate “hands” of the siblings in these compositions, which were created after their father’s death. The issue of attribution is also hampered by the fact that both sons adopted the nickname of “Francia,” used by their father, and thus commonly signed their works “IF” or “I. Francia."26
13
Link Copied
As Giacomo Francia’s style developed, he continued to present stiff figures and, at times, awkward arrangements that the younger Giulio, it appears, was able to shed. Giacomo’s saints have round, almost bloated faces, which Roio suggests may stem from the late work of his father Francesco.27 A clear example of Giacomo’s stouter physiognomy is visible in his Holy Family with St. Dorothea, Two Martyred Saints, and St. Longino (fig. 3). Conversely, the figural style of Giulio Francia is more linear, and in such paintings as Madonna and Child with Infant St. John, St. Francis, St. Dominic, Mary Magdalene, and St. Agnes (fig. 4), he often exhibits a greater mastery of compositional complexity than does his older brother.
placeholder
Figure 3: Giacomo Francia (Italian, about 1486–1557), Holy Family with St. Dorothea, Two Martyred Saints, and St. Longino, about 1520–1530, oil on poplar, about 78-7/10 × 67 in. Whereabouts unknown. 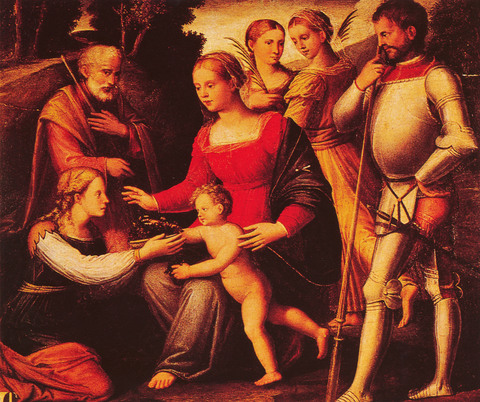 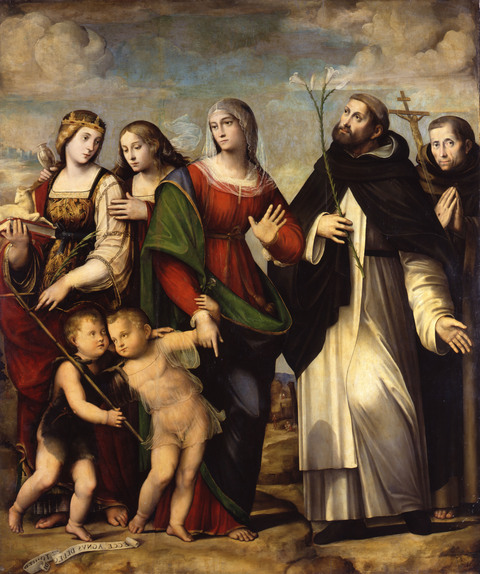 Figure 4: Giulio Francia (Italian, 1487–1540), Madonna and Child with Infant St. John, St. Francis, St. Dominic, Mary Magdalene, and St. Agnes, about 1527–1530, oil on poplar wood, 78-47/64 × 66-59/64 in. Photograph © bpk Bildagentur/ Gemäldegalerie der Staatlichen Museen zu Berlin–Preußischer Kulturbesitz/Jörg P. Anders/Art Resource, NY. Gemäldegalerie, Staatliche Museen, Berlin, Inv. 281.
14
Link Copied
Giulio’s figural linearity alludes to the impact that the work of Mannerist artist Girolamo Francesco Maria Mazzola (1503–1540), better known as Parmigianino, had on the stylistic direction of both Francia siblings. Parmigianino’s stay in Bologna coincided with the Sack of Rome (1527–1530); the artist had fled the Eternal City as it was invaded by the imperial soldiers of the Holy Roman Emperor. Therefore, it was in Bologna that Parmigianino created several of his best works, including Madonna of the Rose (fig. 5) and Madonna with St. Margaret and Other Saints (1528, Bologna, Pinacoteca nazionale).28 While Giacomo shed Parmigianino’s influence fairly quickly after his exposure to it, Giulio appears to have been affected by the work of the visiting artist to a deeper level: Giulio based his Madonna with the Sleeping Infant Christ (fig. 6) on Parmigianino’s Madonna of the Rose. Both panels portray a Christ child who reclines against an orb, while the Virgin Mary stands behind her son. The orb represents the Earth, and Christ’s pose above it symbolizes Christianity’s triumph over paganism. Giulio did not slavishly copy Parmigianino’s composition; he introduced several intriguing alterations in his rendition, including his decision to portray the Infant Christ in repose rather than awake and active. He also elected to pose his holy mother and son before a window that opens on a vista above the baby’s head.
placeholder
Figure 5: Parmigianino (Italian, 1503–1540), Madonna of the Rose, about 1530, oil on poplar wood, 42-29/32 × 34-27/32 in. Photo credit: bpk Bildagentur / Art Resource, NY. Gemäldegalerie Alte Meister, Staatliche Kunstsammlungen, Dresden, Gal No. 161. 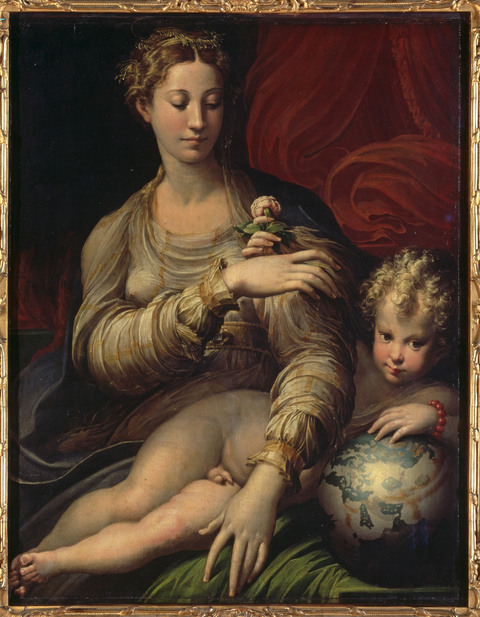 Figure 6: Giulio Francia (Italian, 1487–1540), Madonna with the Sleeping Infant Christ, about 1530, oil on panel, 23-15/64 × 19-11/16 in. Whereabouts unknown.
15
Link Copied
This brief account of the disparities between the style and aesthetic preferences of the two Francia siblings enables the attribution of the Clowes painting to Giulio Francia. A further assessment of the Madonna and Child and Francesco Francia’s Holy Family (fig. 7) is instructive, confirming that the panel was painted by Giulio following the death of his father. Both compositions feature the Madonna supporting her son on a parapet, and in each she inclines her head to her proper left. Despite these obvious similarities, the physiognomy of the Virgin in the Clowes painting is strikingly distinctive; her cheeks are less full than in the Madonna of Francesco’s Holy Family, and the transition from chin to neck is not handled with the same subtlety exhibited in the panel by the elder Francia. Even more distinctive is the Virgin’s angular nose and almond-shaped eyes, which bear a resemblance to Greco-Byzantine icons and are characteristic of Giulio Francia’s saints.
placeholder
Figure 7: Francesco Francia (about 1450–1517), Holy Family, 1510, oil on panel, 25-13/64 × 19-3/32 in. Photograph © The Museum of Fine Arts Budapest/Scala/Art Resource, NY. Szépművészeti Múzeum, Budapest, Inv. 4244. 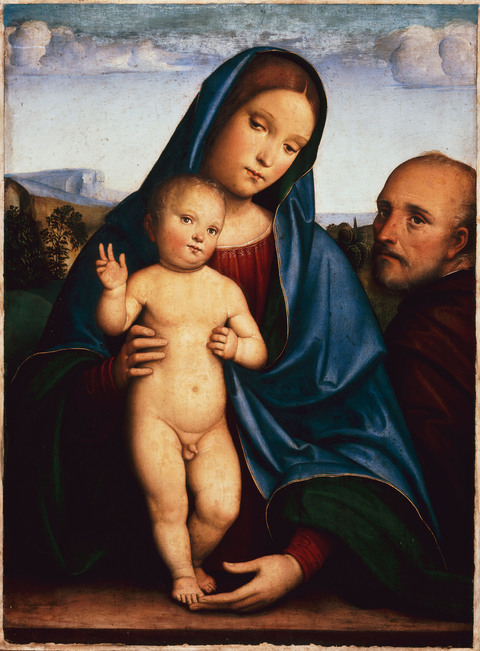 Figure 7: Francesco Francia (about 1450–1517), Holy Family, 1510, oil on panel, 25-13/64 × 19-3/32 in. Photograph © The Museum of Fine Arts Budapest/Scala/Art Resource, NY. Szépművészeti Múzeum, Budapest, Inv. 4244.
16
Link Copied
In the Clowes Madonna and Child, the Virgin gazes knowingly at the viewer. Giulio’s decision to have her engage directly with the observer recalls the painting’s function as a domestic devotional aid. The Virgin candidly yet gently acknowledges the foreknowledge of her son’s life and imparts this knowledge to the viewer. This direct gaze differs from most of the Virgin and Child imagery produced in the Francia workshop. Most such panels featured a demure Madonna looking down at her son or to the side, while the Infant Christ looks out to engage the individual before the panel, as in Francesco’s Holy Family and Giulio’s Madonna and Child with Saints (Fuipiano, San Giovanni Battista). The Clowes painting reverses the workshop’s apparently “sanctioned” presentation by depicting the Infant Jesus looking not to the viewer but rather diverting his gaze. It is intriguing to ponder what caused this stylistic shift; perhaps it was the result of the artist’s development or conceivably it may reflect a patron’s request. Regardless of impetus, the Virgin’s gaze arrests the observer’s glance and simultaneously guides the eye to her son—the source of salvation.

A. Ian Fraser, A Catalogue of the Clowes Collection (Indianapolis: Indianapolis Museum of Art, 1973), 22–23 (reproduced);