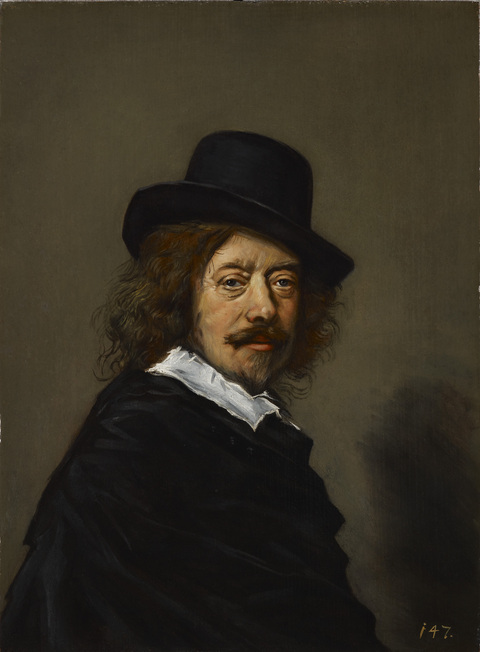 1
Link Copied
This panel shows the likeness of Frans Hals, one of the most celebrated painters of the Dutch Republic. Compared to a rare portrait of the artist (fig. 1) from his own lifetime,1 inserted into a depiction of the Saint George civic guard of 1639, one can observe in the Clowes panel similarities in the broad nose, dark eyes, distinctive mustache and goatee, and flowing locks. Isolated against a neutral background and without attribute, Hals is outfitted in a black cloak adorned with buttons and a simple flat collar. A short-brimmed black hat sits jauntily on his head. He gazes over his shoulder at the viewer, offering a significantly more aged visage than in the Saint George group portrait, with a furrowed brow, thin cheeks, and bags under the eyes. The American writer Booth Tarkington (1869–1946), writing in 1937, appropriately described his appearance as “lacking the remotest taint of vanity."2
placeholder
Figure 1: The figure second from left in the top row is thought to be Frans Hals himself. Frans Hals (Dutch, about 1581–1666), Officers and Sergeants of the Saint George Civic Guard, 1639, oil on canvas, 85-53/64 × 165-3/4 in. Frans Hals Museum, Haarlem, os I-113.

Figure 1: The figure second from left in the top row is thought to be Frans Hals himself. Frans Hals (Dutch, about 1581–1666), Officers and Sergeants of the Saint George Civic Guard, 1639, oil on canvas, 85-53/64 × 165-3/4 in. Frans Hals Museum, Haarlem, os I-113.
2
Link Copied
Just before the painting made its public debut in 1935, it was sung by connoisseur Wilhelm R. Valentiner as an exceptional self-portrait due to its “psychological forming and […] highly-gifted technique."3 The painting had been presumed to be by the master’s own hand when it first appeared in a German royal inventory of 1722.4 Several factors substantiate the painting’s status as a self-portrait: its identification as such in the early inventory, less than sixty years after the artist’s death; the use of the artist’s signature late style and the turn of the head;5 and the fact that at least fifteen versions in a variety of media survive.6 Several of the painted copies will be addressed here, but one watercolor, known as The Apotheosis of Franz Hals by Cornelis van Noorde (fig. 2), bears mentioning in this immediate context. Dated 1754, this watercolor is accompanied by an inscription reading ipse pinxit (he himself has painted it), indicating that it was executed after a painting by Hals’s own hand, the earliest known reference to it as a self-portrait.7 Scholars believe the image depicts the artist around 1645, based on the “enamel-like” quality of the artist’s blacks and whites in this period and the fashion of the unadorned flat collar and short-brimmed hat.8 This date would accord, roughly, with Hals’s age of about sixty-five years.
placeholder
Figure 2: Cornelis van Noorde (Dutch, 1731–1795) The Apotheosis of Frans Hals, 1754, watercolor in greytones, 12-61/64 × 10-5/8 in. Noord-Hollands Archief, Haarlem, NL-HlmNHA_53013504. 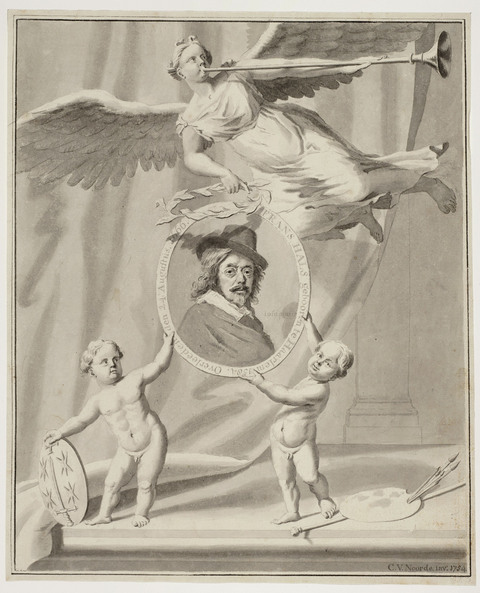 Figure 2: Cornelis van Noorde (Dutch, 1731–1795) The Apotheosis of Frans Hals, 1754, watercolor in greytones, 12-61/64 × 10-5/8 in. Noord-Hollands Archief, Haarlem, NL-HlmNHA_53013504.
3
Link Copied
In 1970, however, noted Hals scholar Seymour Slive declared the Clowes panel to be the best of the eight painted versions after a lost original, an epithet that continues today.9 Replicas may be found in the Metropolitan Museum of Art, New York (fig. 3);10 the Finnish National Gallery, Helsinki;11 and a German private collection (fig. 4).12 Additional versions were formerly in the collections Mrs. Charles H. Senff, New York;13 the Frans Hals Museum, Haarlem;14 the Denver Art Museum;15 and a European, presumably private, collection.16 The striking nearness of these undated versions to each other, however, in composition, size, and overall style provides a strong indication of the original painting’s appearance.17 The Clowes portrait has been praised for its focused, intense expression; its rich color; the plasticity of the hat; and the naturalistic modeling of the face.18 Furthermore, when compared to such authentic portraits as the small-scale seated man holding a branch of about 1645 (Ottawa, National Gallery of Canada, inv. 15901), similarities to Hals in the handling of paint become readily apparent. In the Ottawa painting, a comparable use of unblended brushstrokes around the eyes, a bold contour line in the collar, and even a thin layer of paint in the background that allows the woodgrain to remain visible can be seen. Similar looseness in the hair can also be found in the portrait of Willem Coenraetsz Coymans of 1645 (Washington, DC, National Gallery of Art, inv. 1937.1.69). Dendrochronological investigation suggests a year of creation beginning in 1646,19 which corresponds precisely with Hals’s manner during this time.
placeholder
Figure 3: Copy after Frans Hals (Dutch, about 1581–1666), Frans Hals (1582/83–1666), around 1650s, oil on wood, 12-7/8 × 11 in. Metropolitan Museum of Art, New York, The Friedsam Collection, Bequest of Michael Friedsam, 1931, 32.10.8. 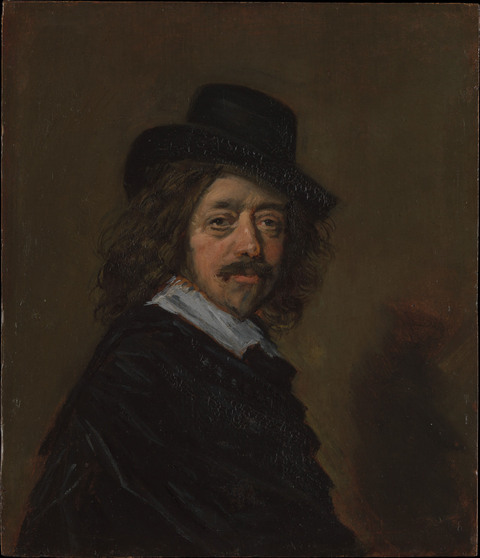 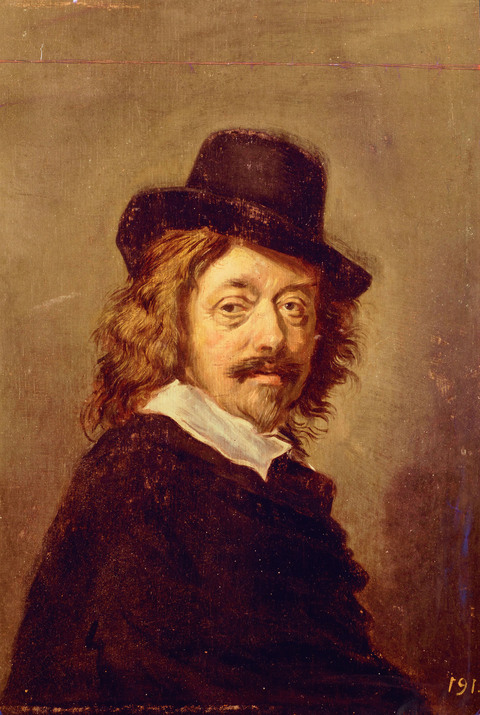 Figure 4: After Frans Hals (Dutch, about 1581–1666), Portrait of Frans Hals, date unknown, 13-5/16 × 9-13/16 in. Formerly Winfried Schönberger, Wiesbaden.
4
Link Copied
Given this information, it is very likely that the painting originated in Hals’s native Holland, possibly even in the artist’s own studio. The construction of the Clowes painting echoes the general preparation of panels in the Dutch Republic in the seventeenth century: it consists of a chalk-based ground on top of a single oak plank with a grayish imprimatur.20 Furthermore, all the materials used, from the support to the varnish, are consistent with a mid-seventeenth century origin.21 While little is known about the structure of Hals’s atelier, documents record several pupils, including Dirk van Delen (about 1605–1671), Adriaen Brouwer (about 1606–1638), Adriaen van Ostade (1610–1685), Philips Wouwerman (1619–1668), Vincent Laurentsz. van der Vinne (1628–1701), and Hals’s son-in-law Pieter van Roestraten (about 1630–1700), as well as the artist’s five sons.22 If the original self-portrait remained in Hals’s studio between 1645 and 1650 as a teaching tool for his students,23 as was the case with some of Rembrandt’s self-portraits, there are only a few candidates for the author of the Clowes painting. Van Roerstraten and Frans II Hals were still in the master’s studio, while his son Jan had settled in Haarlem and joined the painter’s guild at about this time. The strongest argument for the panel to have been executed by someone in Hals’s immediate circle, in addition to the technical evidence, is the proximity of the artist’s style to that of the master.
5
Link Copied
Authors had begun to celebrate the distinctive vivacity of Hals’s portraits at approximately the time that the Clowes painting was created. In 1647, Theodorus Schrevelius (1572–1649), the rector of the Latin School in Leiden, penned the following words of praise for Hals: “His paintings are imbued with such force and vitality that he seems to defy nature herself with his brush. This is seen in all his portraits, so numerous as to pass belief, which are coloured in such a way that they seem to live and breathe."24 Similar sentiments are echoed by the biographer Cornelis de Bie (1627–about 1715) in 1661,25 the anatomist and poet Govaert Bidloo (1649–1713) in 1719 in a posthumous publication,26 and the biographer Arnold Houbraken (1660–1719) in the same year.27 The “master’s touch,” a phrase coined by Houbraken, is one of the defining elements of the artist’s signature style.28 It concerns the bold brushstrokes that hover on the surface of the painting to efficiently articulate the fold in a sleeve or the projection of a nose into space. Such strokes, which were added in the last stages of work,29 may be found in the Clowes portrait in the black cloak that envelopes the artist’s torso.30 Further elements of the “rough style” of painting visible here—the contours defined with a series of sketchy lines, the use of unblended brushstrokes, and an overall sense of a quick finish—align Hals with the tradition of such artists as Titian (1485–1576) and Jacopo Tintoretto (1518–1594), El Greco (1541–1614), and even certain periods in the careers of Peter Paul Rubens (1577–1640), Jacob Jordaens (1593–1678) and Rembrandt van Rijn (1606–1669).31 Such a bold style not only distinguished the artist from his peers and suggested the artist’s ability, but it also may have suggested the movement of a living being, a shifting light, and even the process of working from life.32 It was, thus, an appropriate manner for portraiture and offered a particularly suitable vehicle for a self-portrait.
6
Link Copied
That so many versions of this painting exist is a testament to the popularity of self-portraits in the early modern period. The self-portrait visualized a countenance that was typically behind the easel rather than depicted on it and was thereby a novel subject on the market. Collectors valued them as representations of the painter as a specific person and esteemed them among depictions of uomini illustri. Artists were certainly aware of the status of the self-portrait and capitalized upon the taste for them, as evident by the numerous self-portraits by Hals’s contemporaries, Anthony van Dyck (1599–1641) and Rembrandt (1606–1669), for example.33 Self-portraits of Dutch and Flemish artists are documented in the royal collections of Charles I of England (1600–1649), Leopoldo (1617–1675) and Cosimo III (1652–1723) de' Medici, and Elector Johann Wilhelm von der Pfalz (1658–1717) in the seventeenth century, as well as in the collections of noted connoisseurs Everhard Jabach (1607/12–1695) and Samuel Pepys (1633–1703).34 The simultaneous presence of the Clowes version and the version in a German private collection (see fig. 4) in the royal collection in Dresden in 1722—evident in the corresponding numbers located in their lower right corners—demonstrates the continued regard for self-portraits of famous artists into the eighteenth century.
7
Link Copied
Luigi Lanzi (1732–1810), an early writer on Etruscan art, posited an additional function of the self-portrait when writing on the collection in the Medici gallery in 1782: “every portrait in the two rooms is a self-portrait of the painter, so in each painting one has a depiction of the artist and at the same time a particular example of his style."35 The achievement of the artist’s personal style was thus imperative to the success of the painting when copying a self-portrait. The Clowes panel, which more accurately imitates the “master’s touch” than any of the other versions, thereby occupies a special place in the history of the self-portrait in Northern Europe, for it captures both the appearance and the style of one of the most admired painters of the human face.

Detroit Institute of Arts, 1935, An Exhibition of Fifty Paintings by Frans Hals, no. 49 (as Frans Hals);

E. and A. Silberman Galleries, New York, 1955, An Exhibition of Paintings for the Benefit of The Research Fund of Art and Archaeology, The Spanish Institute, Inc., no. 19, (as Frans Hals);

Indianapolis Museum of Art at Newfields, 2019, Life and Legacy: Portraits from the Clowes Collection, (as after Frans Hals, Portrait of the Artist).

Cornelis Hofstede de Groot, A Catalogue Raisonné of the Works of the Most Eminent Dutch Painters of the Seventeenth Century, Based on the Work of John Smith, vol. 3 (London: Macmillan and Co., 1910), possibly no. 148.2 (as old copy);

“Long-Hidden Work by Hals is Found,” The New York Times (January 9, 1935): 21, reproduced (as Frans Hals; as [erroneously] purchased by H. Klaus of Minneapolis);

A. Ian Fraser, A Catalogue of the Clowes Collection (Indianapolis: Indianapolis Museum of Art, 1973), xxxiii–xxxiv, 78, reproduced (as Frans Hals);

Carla Brenner, Jennifer Riddell, and Barbara Moore, Painting in the Dutch Golden Age: A Profile of the Seventeenth Century (Washington, DC: National Gallery of Art, 2007), 138, reproduced (as after Frans Hals);

Jacquelyn N. Coutré, “The Rise and Fall of a Self-Portrait: Valentiner, Liedtke, and the Metropolitan Museum of Art’s Portrait of Frans Hals,” Journal of Historians of Netherlandish Art 9:1 (Winter 2017): DOI: 10.5092/jhna.2017.9.1.6, (as best copy after Hals original), reproduced.