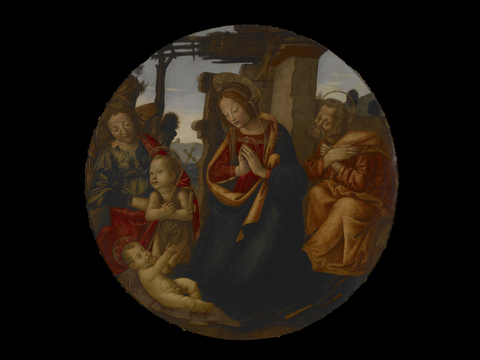 Adoration of the Christ Child

1
Link Copied
Aside from two major fresco commissions that mark the creative peak of his artistic career,1 Bastiano Mainardi is mostly known for medium-sized, square altarpieces, usually representing sacre conversazioni (sacred conversations), and tabernacles and tondi of various sizes.2 In devising the compositions for many of these works, he relied on cartoons developed in the workshop of Domenico Ghirlandaio (1449­–1494).3 Mainardi apprenticed with this Florentine master in the late 1470s and continued to collaborate with his bottega even after his death in 1494, when it was operated by Domenico’s brothers, Davide (1452–1525) and Benedetto (1458–1497).4 Giorgio Vasari made reference to Mainardi at the end of Ghirlandaio’s vita, claiming that the two worked together (“a compagnia”) on a number of commissions, including the Santa Fina fresco cycle at the Collegiata in San Gimignano (1475–77) and the Last Supper (1476) in Passignano.5 Both of these claims should be dismissed on chronological and stylistic grounds. Having received no previous artistic training, Mainardi—then barely 10 years old—could have served only as a garzone in Ghirlandaio’s workshop.6 If anything, he may have assisted the Florentine master on later commissions, such as the San Girolamo ai Frari Gesuati panels in Pisa (1479) or the Sala dei Gigli fresco program at the Palazzo Vecchio (1483–84). The Annunciation dated to 1482 in the baptistery of the Collegiata of San Gimignano, which, solely on the basis of style had traditionally been considered Mainardi’s earliest known work, has since been definitively expunged from his oeuvre.
2
Link Copied
While under Ghirlandaio’s tutelage, Mainardi learned how to draw and paint in the manner of his master. This mimetic operation was such that sometimes his contributions, albeit circumscribed to less important sections of a fresco cycle or altarpiece panel, were indistinguishable from those of Ghirlandaio and other senior members of his workshop. At the same time, this process of assimilation with the studio style allowed for the copious production of smaller “factory” works, in which the master would intervene only in crucial sections.7 Mainardi gained status in Ghirlandaio’s studio during the last decade of the master’s life, in the late 1480s and early 1490s. His profile image, prominently depicted next to Ghirlandaio in The Awakening of the Roman Notary’s Son in the Sassetti Chapel at Santa Trinita in Florence (1483–85), has been interpreted by scholars as a statement of both his newly elevated rank within the studio and proof of his direct collaboration on this fresco cycle.8 This bond between master and disciple was cemented in 1494 with Mainardi’s marriage to Alessandra Bigordi, Ghirlandaio’s half-sister.9
3
Link Copied
A proper assessment of Mainardi’s production has been marred by errors and misattributions since the early twentieth century. The Italian art historian Géza de Fràncovich included works in Mainardi’s corpus that displayed even vaguely Ghirlandaiesque traits or those that could not be attributed to other members of Ghirlandaio’s vast roster of disciples.10 Bernard Berenson compiled a list of more than 70 paintings that he attributed to Mainardi, the majority of which are questionable, both in terms of quality and style, especially when compared with Mainardi’s documented and autograph works.11 For decades, art historians attributed poor-quality pictures originating from Ghirlandaio’s workshop or other affiliated studios to Mainardi. Everett Fahy successfully eliminated a number of problematic works and, at the same time, attributed additional paintings to Mainardi.12 The record was set straight by Lisa Venturini, who, among other things, was able to discover the artist’s correct birth date and definitively eliminated a number of misattributed pictures related to his early career, such as the previously mentioned Annunciation.13 Despite these impressive advancements, scholars neglected to address Mainardi’s workshop production in the first decade of the Cinquecento, when the artist became increasingly removed from major artistic trends.14
4
Link Copied
Throughout his career, Mainardi made little effort to liberate his stylistic idiom from the fetters of Ghirlandaio’s imprimatur, producing works that attempted to be consistent with the latter’s workshop aesthetics. Unlike his master, however, he was never interested in examining stylistic developments in Flemish art. Furthermore, Mainardi’s later production remained unaffected by the creative explosion that took place in Florence during the years between Leonardo’s return to the city in 1503 and Michelangelo’s departure for Rome in 1508. Indeed, there is little evidence in Mainardi’s oeuvre of the former’s sfumato or figura serpentinata, or the latter’s exploration of human anatomy. On the contrary, toward the end of his career, Mainardi began to simplify Ghirlandaio’s formal gravitas, much in the manner of Fra Bartolomeo della Porta (1472–1517) but with little creative input. His altarpieces from the years 1500 to 1510, such as the Enthroned Madonna and Child with Sts. Justus of Volterra and Margaret of Antioch of 1507 (fig. 1), though displaying an intimate monumentality, are devoid of elaborate decorative elements and generally marked by a subdued palette.
placeholder
Figure 1: Bastiano Mainardi (Italian, 1466–1513), Madonna and Child with St. Justus of Volterra and St. Margaret of Antioch, 1507, oil on panel, 63-1/2 × 61 in. (panel). Indianapolis Museum of Art at Newfields, Gift of Mrs. Booth Tarkington in memory of her husband, 51.58. 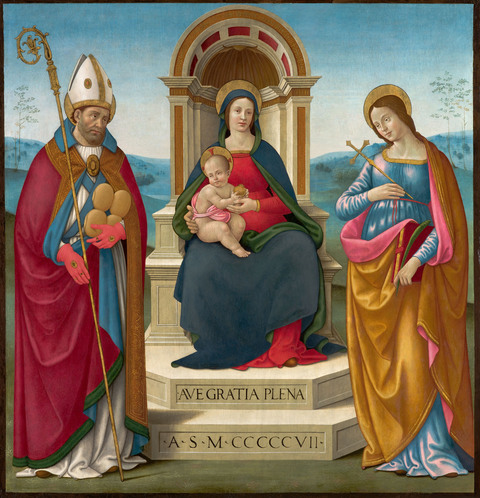 Figure 1: Bastiano Mainardi (Italian, 1466–1513), Madonna and Child with St. Justus of Volterra and St. Margaret of Antioch, 1507, oil on panel, 63-1/2 × 61 in. (panel). Indianapolis Museum of Art at Newfields, Gift of Mrs. Booth Tarkington in memory of her husband, 51.58.
5
Link Copied
Mainardi’s limited artistic ambition might be attributed partly to a deliberate market strategy. At the turn of the century, his workshop in San Gimignano supplied Ghirlandaiesque pictures to middle-class merchants, especially those in towns of the Valdelsa and Valdera regions. The most popular subjects were the Holy Family with Angels and, in particular, the Adoration of the Christ Child, such as that featured in the Clowes painting. These images—intended for domestic devotion—usually commemorated the birth of a child or were related to the cult of Mary. Their compositions were based on cartoons that originated in major Florentine workshops, such as Ghirlandaio’s, and were copied by minor artists who reworked their content according to the specifications of their patrons. Such was the demand for these pictures that local Tuscan workshops would churn them out quickly, in some cases hastily, even before receiving specific commissions. (More than a dozen images of the Adoration of the Christ Child in various sizes and quality have been attributed, for the most part erroneously, to Mainardi.)15 Moreover, it is also not unusual that two artists would produce stylistically different versions of the same composition. To this point, an almost identical version of the Clowes tondo, now at the Virginia Museum of Fine Arts in Richmond, is attributed to the Master of the Naumburg Madonna by Everett Fahy.16 While the Richmond tondo, presents stylistic elements “cribbed from Filippino Lippi just as freely as […] from Lorenzo di Credi,"17 the Clowes tondo is stylistically closer to the artistic sphere of Mainardi. 18
6
Link Copied
The Clowes Adoration of the Christ Child presents several notable art historical challenges. It contains no distinctive attributes (e.g., a saint, cityscape, inscription, object, coat of arms, year) to indicate a precise date of execution, original location, or patron. This tondo, executed in the last decade of the Quattrocento or possibly even the first years of the Cinquecento, depicts the moment shortly after Christ’s birth and before the arrival of the Magi. At the center, a larger-than-life Virgin in three-quarter view kneels in prayer. This posture is generally derivative of the Virgin in Ghirlandaio’s Adoration of the Shepherds in the Sassetti Chapel at Santa Trinita, of 1485,19 which Mainardi often incorporated in other works, such as St. Gemignanus Blessing Mattia Lupi, Domenico Mainardi, and Nello Nelli de’ Cetti, of 1487 (San Gimignano, Sant’Agostino); Pietà with Sts. John the Baptist and Paul, of 1500 (Schwerin, Staatliches Museum), and the Enthroned Madonna with Sts. Sebastian, Francis, and William and Archangel Raphael with Tobias, 1500–1505 (Cappiano, San Lorenzo). A recent X-radiograph indicates that Mary’s face was painted over, substituting the more modest original version. Mainardi’s intervention may be detected in her delicate features, which recall the Virgin and Child with St. John the Baptist and the Three Archangels, Raphael, Gabriel, and Michael, of about 1490–1510, (fig. 2). The stiff and simplistic rendition of her robe, which do not conform to the contours of Mary’s anatomy, can be attributed to workshop assistants.
placeholder
Figure 2: Bastiano Mainardi, (Italian, 1466–1513), Virgin and Child with St. John the Baptist and the Three Archangels, Raphael, Gabriel and Michael, about 1490–1510, tempera on panel, 36-7/32 (diam.) in. Musee d’Art Thomas Henry, Cherbourg, France/Bridgeman Images, M.I. 547. 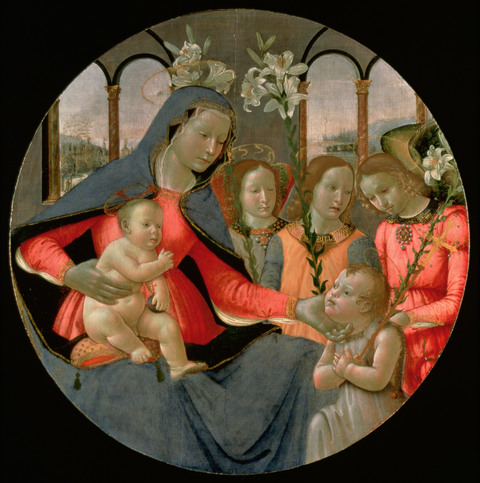 Figure 2: Bastiano Mainardi, (Italian, 1466–1513), Virgin and Child with St. John the Baptist and the Three Archangels, Raphael, Gabriel and Michael, about 1490–1510, tempera on panel, 36-7/32 (diam.) in. Musee d’Art Thomas Henry, Cherbourg, France/Bridgeman Images, M.I. 547.
7
Link Copied
The kneeling angel on Mary’s right, possibly the archangel Uriel, who, according to legend, rescued John the Baptist from Herod’s Massacre of the Innocents, also presents a number of problems. As with the Richmond tondo, the archangel’s posture does not reflect the curved contour of the panel and instead projects outward, disrupting the harmony of the composition. Aside from the jagged and erratic folds of the garments, the figure’s anatomic proportions are incorrect: the head and arms are much larger than the rest of the body, and the elongated fingers of the left hand are awkwardly rendered. Unlike that of Mary, the modeling on the angel’s face presents an aggressive, almost exaggerated chiaroscuro. These elements suggest the hand of the workshop, and similar stylistic flaws are evident in the figure of Joseph, whose crossed arms symbolize humility.
8
Link Copied
Mainardi may have had a more prominent role in the depiction of the Christ child and St. John the Baptist, which stylistically recalls those figures in the Cherbourg tondo. Particular attention is paid to the modeling of their anatomy, constructed with a careful interplay of light and dark, and hair, designed more elaborately than that of the angel and Joseph. As with other tondi displaying this subject, an emotional connection is established between a contemplative Mary—whose somber expression indicates an awareness of her son’s ultimate sacrifice—and her lively child, who extends his right arm toward his mother and, at the same time, turns his head to as if to engage the viewer.
9
Link Copied
The entire scene is claustrophobically set inside a makeshift shed, which according to tradition represents the ruins of King David’s palace in Bethlehem. Several beams extend from this slightly off-axis stone structure, the molding of which includes a token reference to classical architecture. A barren, unimaginative landscape emerges from an opening in the back wall, while a few trees behind Joseph and the angel appear to have been arbitrarily inserted to fill compositional lacunae. These passages denote the less-skilled hand of Mainardi’s workshop, which continues to be studied and assessed today by art historians of late fifteenth and early sixteenth century Italian art

Ian Fraser, A Catalogue of the Clowes Collection (Indianapolis: Indianapolis Museum of Art, 1973), 24–25.