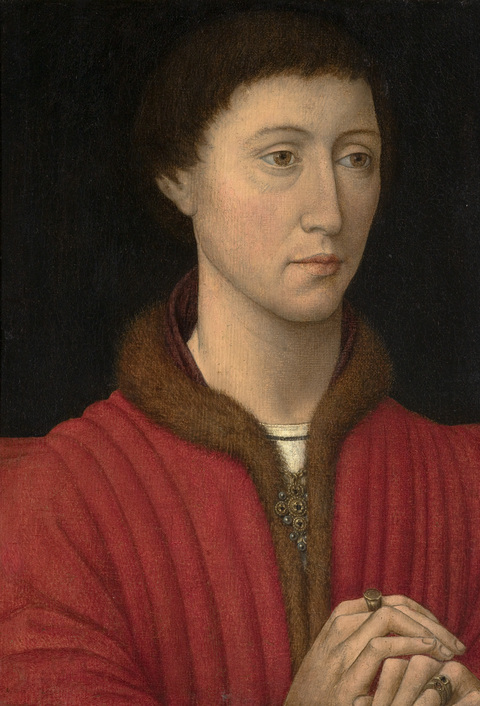 Portrait of a Man

1
Link Copied
Among Dr. Clowes’s distinguished collection of portraits, many of which are masterworks depicting prominent people, this portrait of an anonymous young man stands out by manifesting distinct qualities of Rogier van der Weyden’s (about 1399–1464) portraiture. In addition to the three-quarter view, dark background, and the overlapping hands drawn close to the body, all of which belong to Rogier’s vocabulary of composing half-length portraits, the rich colors and fine brushwork convey a sense of calmness and self-possession characteristic of Rogier’s portraits of Burgundian dignitaries. The sitter wears a white chemise; a red, fur-trimmed doublet; and several pieces of jewelry, including an elaborate cross-shaped pendant and a signet ring. His hairstyle recalls the fashion of the mid-fifteenth century, and his elongated face, accentuated by the sharp nose and echoed by the deep pleats of his doublet, recalls the distinct lithe poise that graces all Rogier’s depicted sitters.
2
Link Copied
The Clowes painting is one of three versions of this subject (the second is likely in private hands, and the third is probably lost). The replication of portraits was common in the Low Countries in the early modern period. Copies after authorized images of the ruling members of the Burgundian court, for instance, were produced and circulated so that a formulaic likeness could be established and recognized by individuals of a wide community.1 Yet, the three paintings of our concern do more than attest to a traditional practice, evidencing, in the meanwhile, its popularity beyond the context of the court. They also provide insight into the practice of replication, with the extensive underdrawing of the Clowes portrait exemplifying such a process.
3
Link Copied
Of the other two versions of the portrait, one was last seen at a Christie’s sale in London in December 2002. In 1902, that painting, then in the collection of Charles-Léon Cardon of Brussels, had appeared in the exhibition Les Primitifs flamands in Bruges. It subsequently passed among private hands and underwent at least two major restorations, one for Agnew’s Gallery, London, in 1939, and the other by Albert Philippot of the Institut royal du Patrimoine artistique, Brussels, in 1968 for Galerie Robert Finck.2 Two photos of the Cardon portrait, one from Jules Destrée’s monograph Roger de la Pasture—Van der Weyden (1930), and the other provided to the Clowes Foundation by Finck in 1968, show apparent changes to the sitter’s right hand (figs. 1 and 2). The rationale for flattening the fingers, which most likely occurred during the 1968 restoration, is yet unknown.3 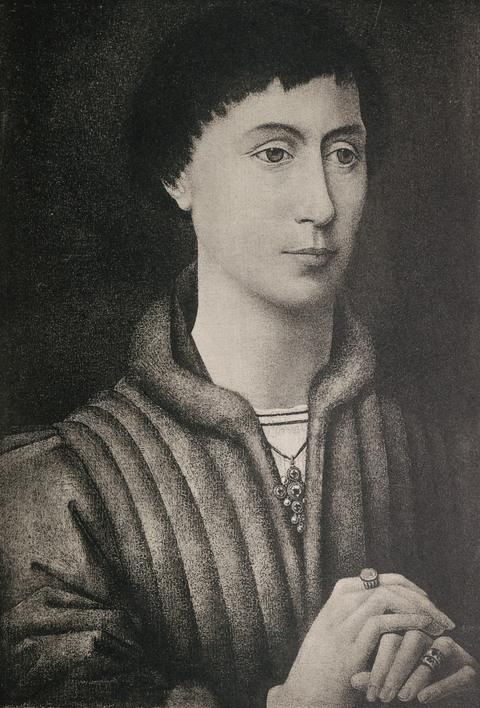 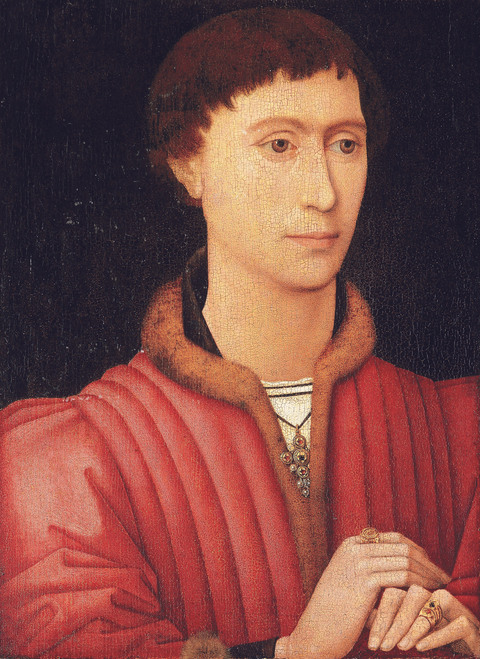 placeholder
Figure 1: 1930 photo detail of “Cardon” portrait. Jules Destrée, Roger de La Pasture van der Weyden (Paris and Brussels: G. van Oest, 1930), Plate 134. Courtesy Lilly Library, Indiana University, Bloomington, Indiana.
Figure 2: Circle of Rogier van der Weyden (Flemish, about 1399–1464), Portrait of a Young Man, Bust-Length, in a Fur-Trimmed Red Doublet, about 1450–1460, oil on panel, 14-1/2 × 10-1/2 in. Private Collection. Photo © Christie"s Images/Bridgeman Images.
4
Link Copied
Despite the restorative change, the Cardon portrait provides clues to the pentimenti in the Clowes painting, whose painted state diverges from the underdrawing at various places. In the underdrawing, the right sleeve of the Clowes sitter resembles that of the Cardon sitter (fig. 3). It is possible that the preparatory plan of the Clowes portrait adhered closely to the Cardon portrait, or a lost version that was similar. The pentimenti also include a semicircle adjacent to the sleeve, indicating an original plan to depict the fur trim visible in the Cardon portrait. (Its absence from the Clowes portrait likely derived from a conservation decision.) In addition to these changes, the meticulous hatching and crosshatching establish that the Clowes painting was made after a finished picture—instead of a living person—that dictated its final appearance. Indeed, the thorough mapping of the sitter’s nose and jawline, and the shading under the lower lip, nostril, and left eye suggest that the artist had planned both contour and shadow before painting. Furthermore, given the final alterations—i.e., the smoothed sleeve and raised hairline—one might speculate that more than one painting had served as a prototype for painting the Clowes portrait.
placeholder
Figure 3: Infrared reflectography showing the underdrawing of Follower of Rogier van der Weyden’s Portrait of a Man, Indianapolis Museum of Art at Newfields, The Clowes Collection, 2018.27. 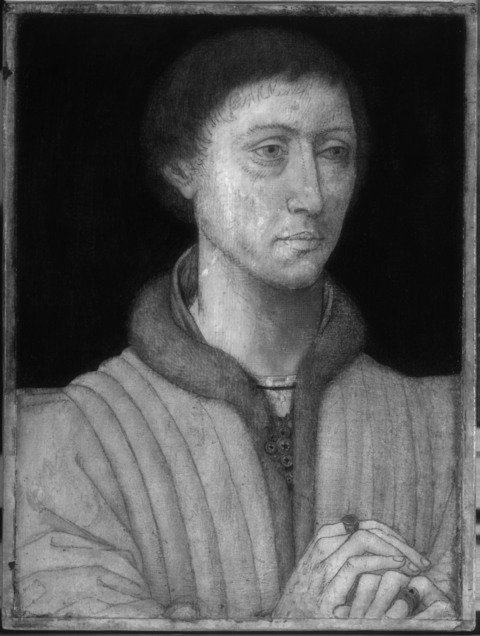 Figure 3: Infrared reflectography showing the underdrawing of Follower of Rogier van der Weyden’s Portrait of a Man, Indianapolis Museum of Art at Newfields, The Clowes Collection, 2018.27.
5
Link Copied
The third portrait of the trio may well be an additional precursor. Formerly in the collection of Carl von Hollitscher (1845–1925) of Berlin, this painting is now only known from a photograph (fig. 4) from the Max J. Friedländer Archive (The Hague, Rijksbureau voor Kunsthistorische Documentatie). The back of the photograph bears Friedländer’s handwriting, which states that he knew not the painting’s whereabouts, despite having acquired the photograph from the Kaiser Friedrich Museum.4 Importantly, this portrait was not included in the 1912 catalogue of the Von Hollitscher collection, edited by Friedländer himself and Wilhelm von Bode.5 Since this photograph is undated, one can only presume that the painting had left the collection by 1912. The smoothed sleeve, raised hairline, and general features of the Von Hollitscher sitter suggest that the painting may have been the source for the Clowes painting’s deviation from its underdrawing.6 Moreover, that the three versions are interrelated—in terms of both likeness and configuration—suggests that some sort of cross-referencing would have been in place for copying of a portrait, so that details, to say the least, could have been compared, scrutinized, and adjusted.
placeholder
Figure 4: After Rogier van der Weyden, Portrait of a Young Man, about 1400–1599, oil on panel. Private collection of Carl von Hollitscher, Berlin. Image courtesy RKD – Netherlands Institute for Art History, BD/RKD – ONS/Photo-archive M.J. Friedländer, 232913. 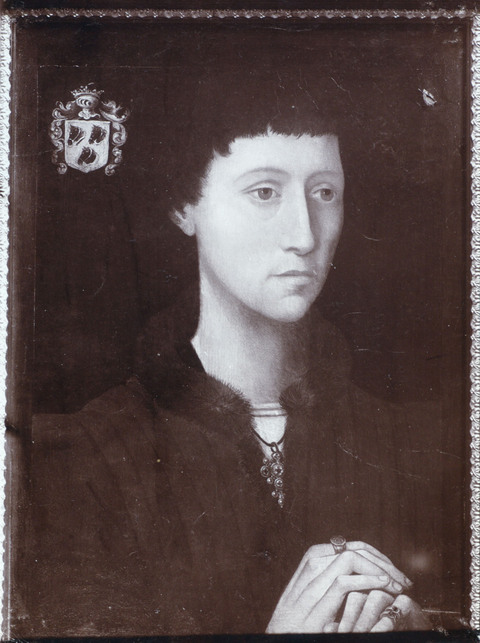 Figure 4: After Rogier van der Weyden, Portrait of a Young Man, about 1400–1599, oil on panel. Private collection of Carl von Hollitscher, Berlin. Image courtesy RKD – Netherlands Institute for Art History, BD/RKD – ONS/Photo-archive M.J. Friedländer, 232913.
6
Link Copied
Absent from both the Clowes and the Cardon portraits, but present in the Von Hollitscher version, is a coat of arms, which identifies the sitter as a member of the Van Themeseke family of Bruges.7 (See fig. 5, X-radiograph of the Clowes portrait, which shows losses of paint at the upper-left corner. This may be the area of an erased coat of arms.) An 1851 heraldic registry describes their coat of arms as “d’or, à trois têtes et cols de cheval de sable bridées d’argent. Cimier: une tête et col de cheval de l’écu entre un vol d’or” (In gold, three horse heads and necks. Their crest: one horse head and neck flanked by golden wings).8 The Van Themseke crest can also be found in a blazon page representing the troop of Jan van Bruges, Lord of Gruuthuse, in the fifteenth-century Traittié de la forme et devis comme on fait les tournois (fig. 6), a manuscript attributed to King René d’Anjou of Sicily and Naples (1409–1480).9 Members of the Van Themeseke family—a Louis and a Daniel—were among those who accompanied Duke Philip the Good of Burgundy on his expedition of vengeance against King Charles VII of France following the murder of his father, Duke John the Fearless, in 1419.10 Given the survival of three portraits, the Clowes sitter may well be among the most prominent members of the family.
placeholder
Figure 5: X-ray image showing paint loss of Follower of Rogier van der Weyden’s Portrait of a Man, Indianapolis Museum of Art at Newfields, The Clowes Collection, 2018.27. 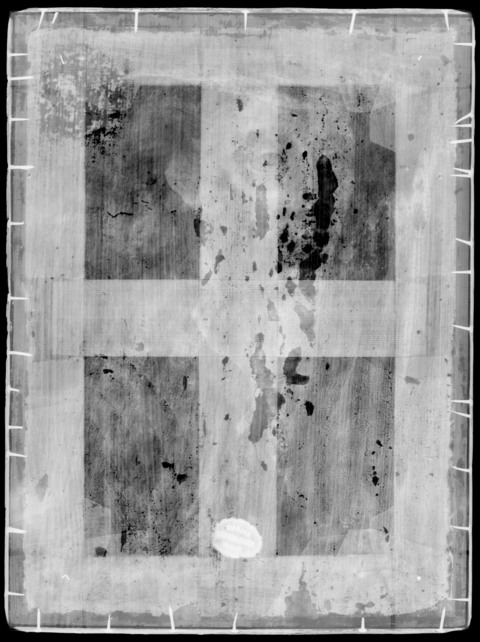 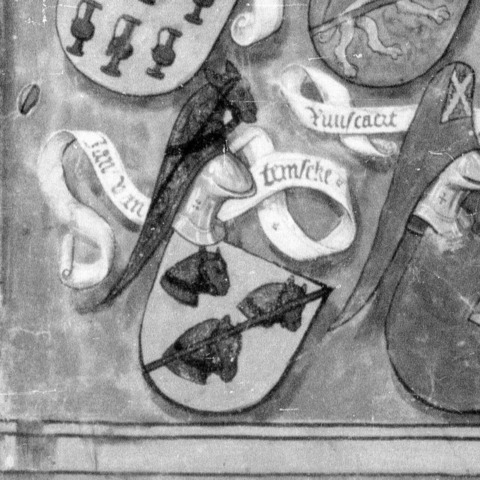 Figure 6: Blazon page (detail). René I d’Anjou (French, 1409–1480), Traité de la forme et devis comme on peut faire les tournois, 1401–1500, manuscript, Bibliothèque nationale de France, Département des Manuscrits, MS. Fr. 2692, fol. 4v–5r. ark:/12148/btv1b9059162x.
7
Link Copied
The Friedländer Archive also contains a photograph taken during a restoration of the Clowes portrait (fig. 7). On the back of the photograph, in Friedländer’s handwriting, is the notation: “v Nemes XII. 30” [Von Nemes December. (19)30].11 The restoration, possibly commissioned by the Hungarian collector Marczell von Nemes, reveals substantial paint loss on the sitter’s left cheek, chin, neck, and collar. Moreover, a second stripe on the chemise—a detail shared by the Cardon and the Von Hollitscher portraits—indicates that its omission from the Clowes portrait was the result of a restorative decision. This photograph also shows the fur trim of the sleeve, another detail that has since been eliminated. The removal of both elements probably took place during the restoration for Von Nemes, as another photograph in the Friedländer Archive closely matching the current state of the Clowes portrait shows the result of a later treatment. On the back of this photograph, Friedländer wrote: “Silberman X. 36 v. Eigenberger gereinigt” [Silberman October. (19)36 restored by Eigenberger].12 The date likely indicates the time of the photograph’s reception, not that of the actual restoration. Apart from the fact that Dr. and Mrs. Clowes acquired the portrait from the brothers Elkan and Abris Silberman, who had a gallery in Vienna, in 1934, Friedländer noted on the back of another photograph—of the Cardon portrait—that Robert Eigenberger, the director of Vienna’s Akademie der bildenden Künste, attended to the Clowes painting in 1934. In the same note Friedländer wrongly asserted that the Cardon portrait was the same painting dealt by the Silberman brothers, although this mistake is consistent with the mix-up of the two paintings in his Early Netherlandish Painting.13
placeholder
Figure 7: Photograph of the Clowes Portrait of a Man taken during restoration, 1930. Image courtesy RKD – Netherlands Institute for Art History, BD/RKD – ONS/Photo-archive M.J. Friedländer, 232912. 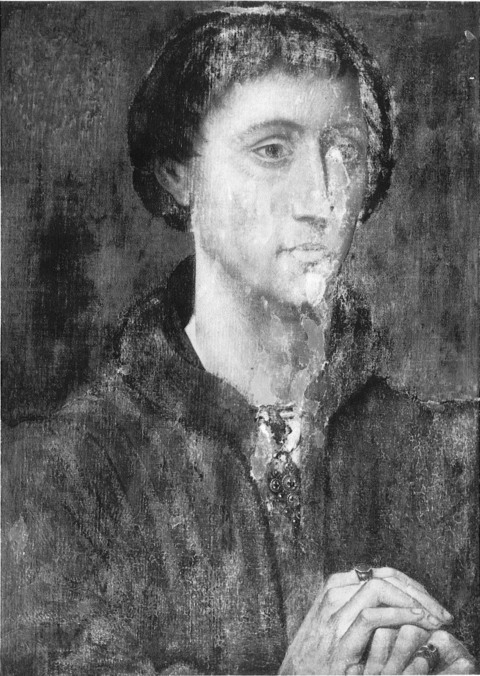 Figure 7: Photograph of the Clowes Portrait of a Man taken during restoration, 1930. Image courtesy RKD – Netherlands Institute for Art History, BD/RKD – ONS/Photo-archive M.J. Friedländer, 232912.
8
Link Copied
Despite having better preserved “an old core” than the Cardon painting, the Clowes portrait received less scholarly attention at least in the first half of the twentieth century.14 Of the Cardon painting, the Belgian art historian George Hulin de Loo deemed, according to the critic Jules Destrée, that “the composition, the drawing of the neck and the hands recall Roger. But the work has suffered too much for us to decide.” Nonetheless, De Loo dated the painting to 1450–55.15 Friedländer regarded it as an authentic Rogier, writing in 1947—that is, before the drastic cleaning of 1968—that “as far [as] I can judge from the photo, this picture by Rogier v.d. Weyden makes recently cleaned with success [sic] a better impression than 1902 at the exhibition in Bruges."16 Less convinced of the work’s authenticity, Erwin Panofsky noted that “A Portrait of a Young Man which, if authentic, would be approximately contemporaneous with that of Guillaume Fillastre was recently sold at Christie’s …; but to judge from the reproduction it is not equally convincing."17 Of the Clowes portrait, Austrian art historians Gustav Glück and Eigenberger, in their joint expertise, regarded the painting as “a very important, noble, stylish and characteristic work of Roger van der Weyden.” Dating it to 1450–60, the scholars underlined “the forms of the (sitter’s) hands,” which they considered similar to those in Rogier’s Portrait of Francesco d’Este (New York, The Metropolitan Museum of Art).18 While these authentications have become no longer tenable, the two works—in particular the one in Indianapolis—bear close formal and stylistic ties to Rogier’s half-length portraits. The Clowes portrait belongs to the exceedingly small body of early Netherlandish portraits and, like those portraits, solicits admiration for its lustrous finish and exquisite likeness.

Clowes Fund Collection, Indianapolis, Indiana, since 1958, and on long-term loan to the Indianapolis Museum of Art since 1971.

Given to the Indianapolis Museum of Art at Newfields in 2018.

Indianapolis Museum of Art at the Newfields, Indianapolis, IN, 2019, Life and Legacy: Portraits from the Clowes Collection.

Marin Davies, Rogier van der Weyden: An Essay, with a Critical Catalogue of Paintings Assigned to Him and to Robert Campin (London: Phaidon, 1972), 217.

A. Ian Fraser, A Catalogue of the Clowes Collection (Indianapolis: Indianapolis Museum of Art, 1973), 102–3 (reproduced);