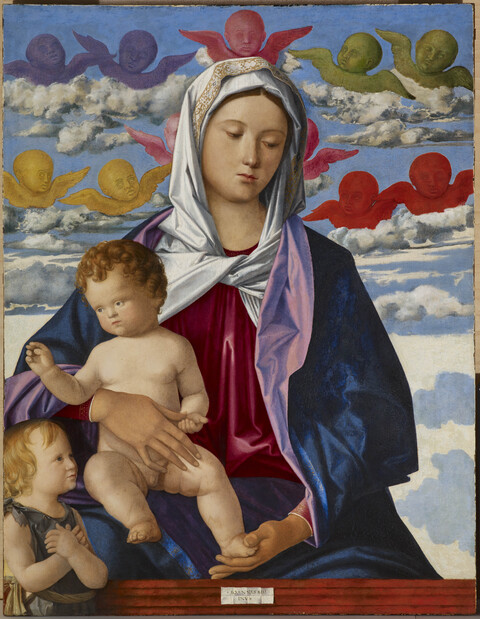 Madonna and Child with St. John the Baptist

1
Link Copied
An estimated 18 replicas of this Madonna and Child composition, originating from the workshop of the fifteenth-century Venetian master Giovanni Bellini (1431­–1516), are known. Among them, the Clowes Madonna and Child with St. John the Baptist deserves special attention. The inclusion of multicolored cherubim and the child St. John the Baptist, for example, is unique to the painting and, together with its fine craftsmanship and quality of material, point to the unique place it occupies among the numerous other versions.
2
Link Copied
Devotional images of the half-length Madonna and Child were the lifeblood of Giovanni Bellini’s workshop and were produced in such large numbers that sorting out the prototypes, versions, and replicas of the many documented compositions has been a challenge for scholars.1 The art historian Rona Goffen, in her seminal research on Bellini, estimated that more than eighty extant compositional variants derive from his workshop.2 Intended for private use, this painting of the half-length Madonna, with its intimate vantage point and reverent yet accessible atmosphere, encouraged contemplation in the viewer and served as an aid to devotion.3 The variant seen in the Clowes painting seems to have been one of the most highly sought after, as evidenced by the frequency with which it was copied both within Bellini’s workshop and beyond.4 This profusion of replicas is underscored in the Indianapolis Museum of Art’s own collection, which contains a second, nearly identical copy of the same composition, attributed to Giovanni Bellini’s pupil Niccolò Rondinelli (about 1450–about 1510) (fig. 1).
placeholder
Figure 1: Niccolò Rondinelli (Italian, about 1450–about 1510), Madonna and Child about 1500, tempera and oil on panel, 30 × 23-1/8 in., Indianapolis Museum of Art at Newfields, James E. Roberts Fund, 24.6. 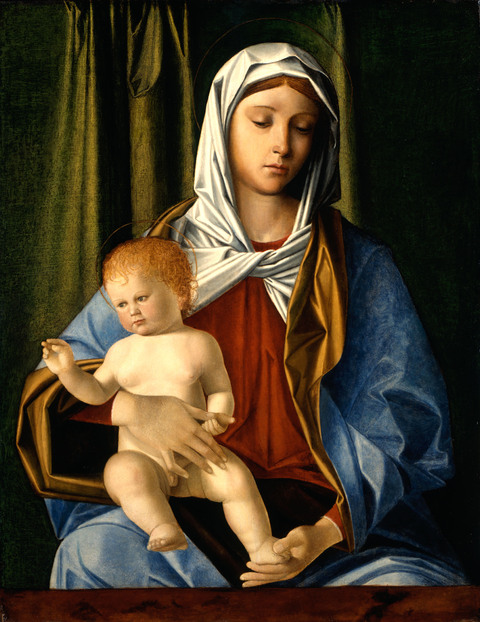 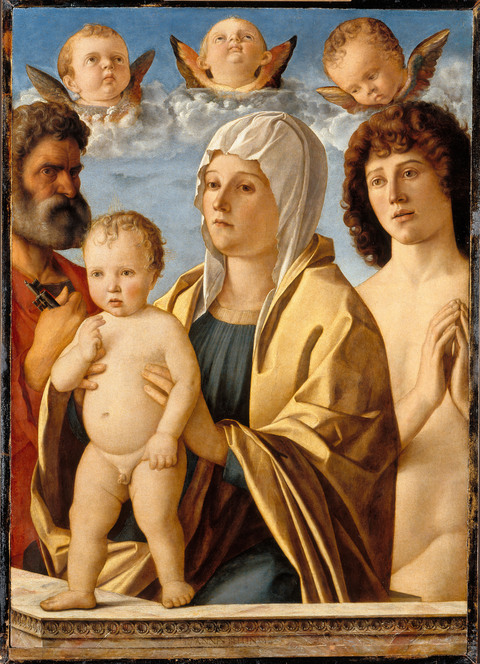 Figure 2: Giovanni Bellini (Italian, about 1431/1436­–1516), Virgin and Child between St. Peter and St. Sebastian, about 1487, oil on wood, 32-9/32 × 22-54/64 in. Photo © RMN-Grand Palais / Art Resource, NY. The Louvre Museum, Paris, MI231.
14
Link Copied
The pictorial device of representing the winged heads of angels, most often interpreted to be cherubim (and/or seraphim) in visionary imagery, had been established by the fifteenth century in Venice and was grounded in scriptural references to the roles of cherubim as the attendants of God, bearers of the throne, and guardians of paradise.25 Pictorially, they help to establish the visionary space by symbolically demarcating the divine realm from the earthly one occupied by the worshiper. Their presence, originally associated with the traditional device of the mandorla, points to the ever-challenging problem artists encountered of depicting the mystical, immaterial world in a visibly accessible way.26 In Venice, the precedent for this type of imagery was explored within Bellini’s own family: by his father Jacopo (about 1400–1470/1471), in images such as the Madonna of the Cherubim (Venice, Gallerie dell’Accademia); and by his brother-in-law Andrea Mantegna (about 1431–1506),27 who often included them in combination with a mandorla, as seen in his Trivulzio Madonna (Milan, Sforza Castle Pinacoteca).
15
Link Copied
In the Clowes painting, Giovanni’s contribution of a more naturalistic approach to the traditional visionary imagery is apparent. The winged heads emerge from a glowing cloud-filled sky, arrayed in the Aristotelian colors of the rainbow: purple, green, red, and yellow.28 This association of the rainbow with cherubim is undoubtedly a general reference to divine vision, and calls to mind, more specifically, the biblical vision of Ezekiel,29 which includes a description of a throne surrounded by living winged creatures and a rainbow-like brightness, upon which was seated the likeness of the glory of God. In this way, in the Clowes Madonna and Child with St. John the Baptist, Mary symbolizes the throne upon which her son, the physical incarnation of God, is seated. As one of her many devotional titles reveals, she is the sedes sapientiae or the Throne of Wisdom.
16
Link Copied
As mentioned above, the Clowes painting is unique in its depiction of the Baptist as a child, but two other versions ascribed to Giovanni Bellini—one in the Städel Museum in Frankfurt (fig. 3) and the other in the Galleria Nazionale delle Marche in Urbino (fig. 4)—include St. John the Baptist as an adult, along with his aged mother, St. Elizabeth. Comparisons of manual tracings made from these two examples reveal that the Madonna and Child grouping share the exact contours of the Clowes painting and the aforementioned version by Rondinelli (fig. 5).30
placeholder
Figure 3: Giovanni Bellini (Italian, about 1431/1436–1516) and workshop, Madonna and Child with Saints John the Baptist and Elizabeth, about 1490–1500, mixed technique on poplar, 28-15/32 × 35-33/64 in. Photo © Städel Museum - ARTOTHEK. Städel Museum, Frankfurt am Main, 853. 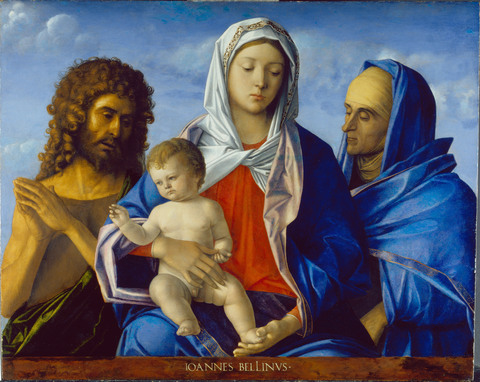 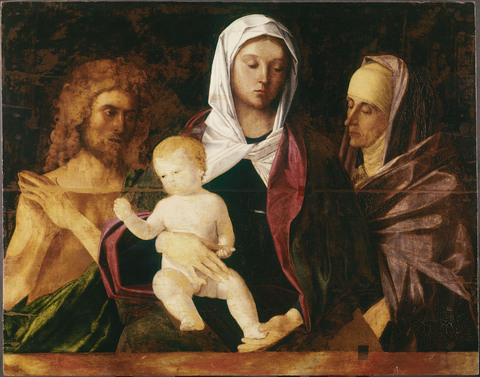 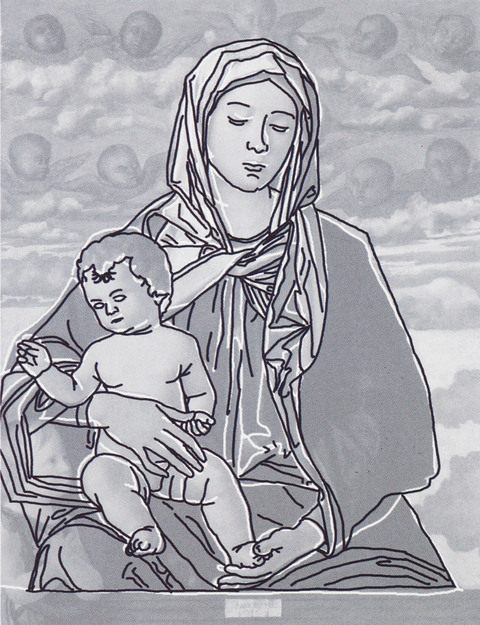 Figure 5: Giovanni Bellini and Workshop, Madonna and Child with St. John the Baptist, Indianapolis Museum of Art at Newfields, with white tracing of compositional elements overlaid with black tracing of Frankfurt version (fig. 3).
17
Link Copied
Infrared reflectography (IRR) examinations of the Frankfurt, Urbino, Clowes, and Rondinelli paintings reveal the versatility of transfer techniques within the workshop system and point to a flexible workshop environment that was responsive to the changing needs of the master, his assistants, and their patrons. In the Frankfurt painting, which has often been considered the finest version because of its stylistic affinity to the master, IRR analysis points to the use of a detailed pounced cartoon that indicates both contours and areas of shadow. The forms of the underdrawing are further accentuated by closely spaced hatching that is typical of Bellini.31 This sensitively modeled underdrawing differs significantly from that found in the Urbino version, which is characterized by a traced outline with no hatchwork.
18
Link Copied
IRR did not reveal a carbon-based underdrawing in the Clowes painting. 32 While this does not rule out the presence of an underdrawing rendered in an undetectable medium,33 it does make analysis of the transfer technique and the painting’s relationship to the other versions more difficult to discern. For example, IRR analysis of the Frankfurt painting reveals a number of changes that were made to the underdrawn proper right hand, fingers, and forearm of the Virgin that are not apparent on the paint surface. These very same alterations can be seen with the naked eye in the Urbino painting because they were made after the painting process had begun. While it is apparent that these same changes were followed in the Clowes painting, it is unclear whether they were already registered in the underdrawing.
19
Link Copied
Tracking these small changes from one version to the next can be useful in determining the sequence and relationship of one painting to another, as has been demonstrated with the IMA’s Rondinelli version.34 According to IRR analysis, the alterations to the Madonna’s hand and arm that were being worked out in the Frankfurt and Urbino versions are fully realized in the traced underdrawing of the Rondinelli painting, suggesting that it was executed later, perhaps by means of a cartoon made from the paint surface of one of Bellini’s most recognizable motifs. Doubtless Niccolò Rondinelli had a special connection to the Madonna and Child composition of the Clowes painting, as can be seen in the number of versions that have been attributed to him, including the signed Madonna and Child (fig. 6) and St. John the Evangelist Appearing to Galla Placidia (fig. 7). In the latter, the Madonna and Child appear in the central altarpiece behind the figure of Galla Placidia, indicating that this popular design appeared in more than just private devotional imagery of the time.
placeholder
Figure 6: Nicolò Rondinelli (Italian, about 1440–about 1520), Madonna and Child, about 1465–1510, oil on panel, 30-3/4 × 24-39/64 in. Photo credit: Alinari / Art Resource, NY. Galleria Doria Pamphilj, Rome. 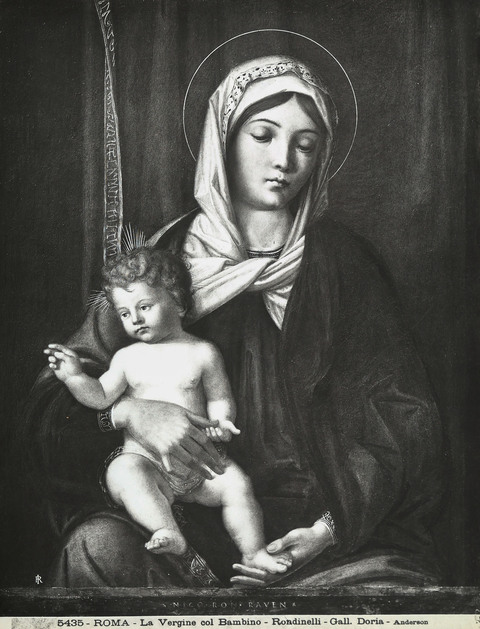 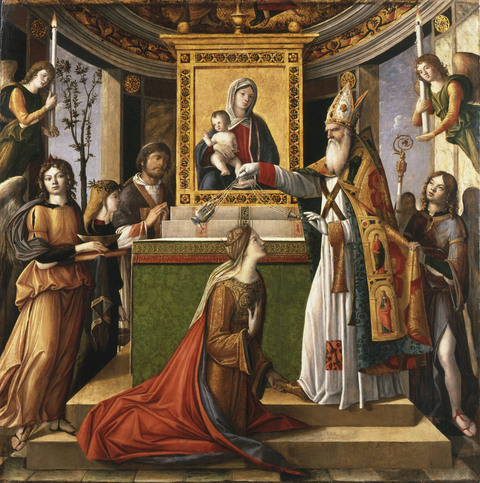 Figure 7: Nicolò Rondinelli (Italian, about 1440–about 1520), St. John the Evangelist Appearing to Galla Placidia, about 1490–1510, oil on panel, 68-57/64 × 68-57/64 in. Photo © Pinacoteca di Brera, Milano. Pinacoteca di Brera, Milan, 91.
20
Link Copied
To this point, it is difficult to know the context from which this Madonna and Child compositional design originated. In addition to frequently appearing in smaller private devotional formats, it can also be seen in larger sacre conversazione, both full and half-length, as well as within larger narrative paintings like the St. John the Evangelist Appearing to Galla Placidia. Perhaps it is with an eye to these different types, with their depictions of celestial skies, attending saints, and supplicating figures, that we can best understand the Clowes Madonna and Child with St. John the Baptist, with its cherubim-filled sky and humble Baptist. In its traditional devotional function, its iconographical expansion sets it apart, while its fine material quality and stylistic and technical correspondence to the hand of Bellini categorize it as a work deserving of special attention.

Dallas Museum of Fine Arts, 1936, Exhibition of Painting, Sculpture, and Graphic Arts, no. 9;

Indianapolis Museum of Art, 2004–2005, Giovanni Bellini and the Art of Devotion.

A. Ian Fraser, A Catalogue of the Clowes Collection (Indianapolis: Indianapolis Museum of Art, 1973), 12–13 (reproduced);