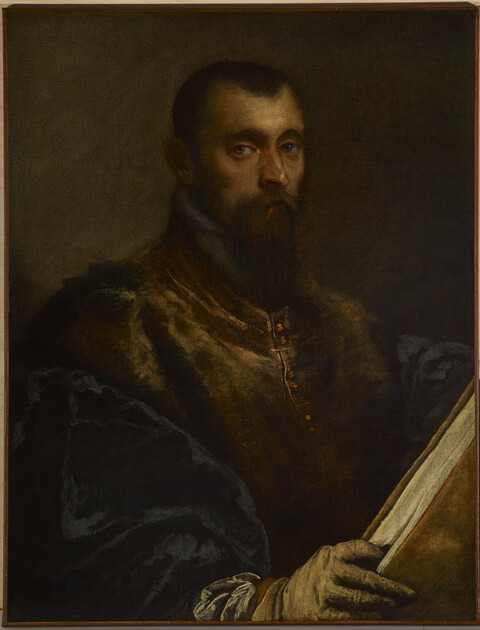 Portrait of a Man

1
Link Copied
Portrait of a Man is a handsome painting stylistically rooted in the Venetian tradition. Bold, painterly brushstrokes describe a range of textures: soft fabrics, ruffled fur, crisp parchment, and buffed leather. The unidentified sitter’s features are distinguished by an aquiline nose and a fashionably trimmed beard and moustache. The sumptuous, fur-lined cloak and buttoned velvet doublet suggest a nobleman or a wealthy merchant.1 His sober gaze is matched by an earthy palette and offset by a pair of voluminous, blue sleeves and the crisp white of the bound volume. This oversized tome alludes to an intellectual preoccupation, one seemingly interrupted as the man turns his cool gaze outward while a finely gloved hand holds a page. This self-conscious action underscores the book’s importance, which may allude to his identity. (On Venetian portraiture, see also Portrait of Andrea de’ Franceschi.)
2
Link Copied
Little is known of this portrait prior to its purchase in 1939 by Dr. George H.A. Clowes of Indianapolis. It was sold as the work of Titian (1490–1576) according to several connoisseurs who unanimously agreed that the painting’s brushwork and use of color aligned with the artist’s later period.2 But in 1940 the art historian Hans Tietze put forward serious reservations over this attribution, instead suggesting it dated to a later period.3 Subsequent treatment campaigns—primarily cleaning and inpainting—support Tietze’s assessment.4 In 1956, it was sent to William Suhr, conservator of the Frick Collection in New York. Black-and-white photographs from his archives document the painting’s condition before, during and after treatment (fig. 1).5 Cleaning removed much of the overpaint to reveal losses throughout the background and in areas of the face. As a result, Suhr concluded it was “a perfectly genuine picture which went under the name Titian which it is not."6 The most recent treatment of this painting dates to 1989, during which the IMA’s paintings conservator focused on areas of preexisting abrasion—centered around the chest—that were addressed with localized inpainting (see Technical Examination Report).7
placeholder
Figure 1: Conservation photograph of Portrait of a Man (front, cleaned state). Getty Research Institute, Los Angeles (870697), William Suhr Papers, Box 76, Folder 36. © J. Paul Getty Trust. 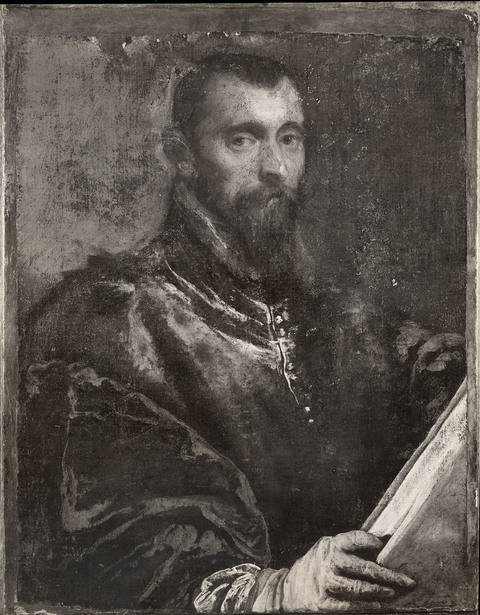 Figure 1: Conservation photograph of Portrait of a Man (front, cleaned state). Getty Research Institute, Los Angeles (870697), William Suhr Papers, Box 76, Folder 36. © J. Paul Getty Trust.
3
Link Copied
If not Titian, then who painted this Portrait of a Man? With the exception of overpaint from previous restorations, the materials and techniques used generally align with sixteenth-century and early seventeenth-century practices, including the canvas support prepared with a red ground layer. Colored grounds (pigmented priming layer over a gesso layer) were increasingly used in Venice by the second half of the sixteenth century, in particular by Jacopo Bassano (about 1510–1592), Jacopo Tintoretto (1519–1594), and their workshops and followers.8 (On Tintoretto, also see Apollo and the Muses.)
4
Link Copied
Infrared reflectography examination indicates that the figure’s general form was established using a wet, carbon-based medium applied by brush. This is best seen around the upper body in the head, shoulder, and chest (fig. 2). There are no pentimenti; however, there is a slight upward adjustment augmenting the curve of the shoulder. Strong lines located at the areas of the neck and beard were applied to reinforce the form, but these appear to be the result of a later intervention. Analysis of the X-radiograph reveals an odd variation in the form of a scrolling brushstroke running from the upper left of the canvas and diagonally through the figure’s head and toward the book (fig. 3). This does not relate to the surface composition and suggests either an anomaly in the underlying preparatory layer or part of an image from a repurposed canvas.
placeholder
Figure 2: Infrared reflectogram showing slight adjustments of the figure and damages in the background. Attributed to Leandro Bassano, Portrait of a Man, about 1590–1600, Indianapolis Museum of Art at Newfields, The Clowes Collection, 2016.163. 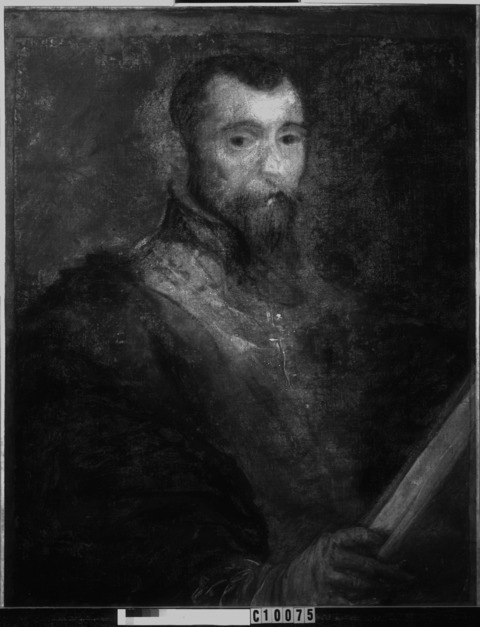 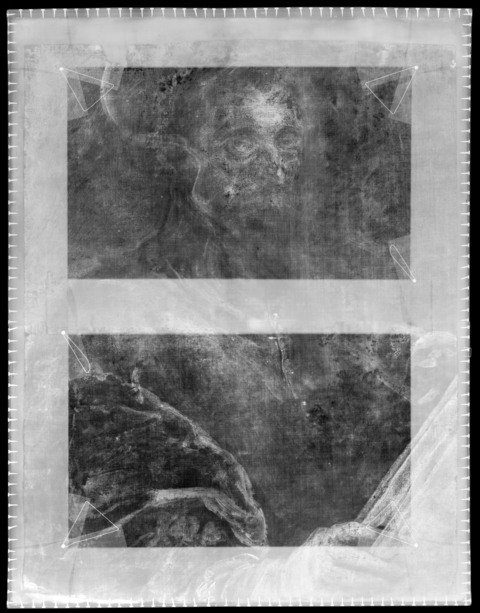 Figure 3: X-radiograph of Portrait of a Man, about 1590–1600, Indianapolis Museum of Art at Newfields, The Clowes Collection, 2016.163.
5
Link Copied
The painting’s attribution to Leandro Bassano was provisionally assigned by Mark Roskill in 1968.9 Born Leandro dal Ponte (1557–1622), he was called Bassano after the northern Italian town from which his family originated.10 His father, Jacopo, was ranked highly among celebrated Venetian artists and the young Bassano worked closely alongside him in the family’s flourishing workshop that included his brothers Francesco (1549–1592), Giambattista (1553–1613), and Gerolamo (1566–1621).11 After the deaths of both his father and Francesco in 1592, Leandro moved permanently to Venice, where he continued to produce altarpieces and also painted for the Doge’s Palace, the political seat of Venice. He was an acknowledged portraitist, and his fame in this genre was solidified in 1595 when Doge Marino Grimani (1532–1605) knighted him for the portrait now in Dresden.12
6
Link Copied
Close examination indicates the painting’s canvas has been cut along all four edges (see fig. 2). The extent of the reduction is not known; however, in comparing it to other examples by Leandro, its narrative quality is a marked departure from his smaller bust-length arrangements, such as those in the Ringling Museum of Art in Sarasota and the Art Gallery of Ontario. Instead, the present work suggests a similar pictorial arrangement observed among his half-length compositions, including the Portrait of Prospero Alpino, 1592 (42-3/4 × 33-5/8 in.; Stuttgart, Staatsgalerie); the presumed Portrait of Tiziano Aspetti Holding a Statuette, about 1592–1593 (fig. 4); and the Portrait of the Merchant Leonhard Hermann, about 1595 (fig. 5). Respectively, the occupations of the sitters were scholar and physician, artist, and merchant.13 The width of the Aspetti portrait conforms to the Vicentine braccio (average 27-1/8 in. or 69 cm), the Italian unit of measure for textiles, whereas the current width of the Clowes portrait is 22-15/16 inches.14 Supposing that the original canvas conformed to the width of a single braccio, the difference is as much as 4 inches (10.8 cm). Regardless of a reduction to the canvas, in its current state, the portrait is a coherent and dramatic image.
placeholder
Figure 4: Leandro Bassano (Italian, 1557–1622), Portrait of Tiziano Aspetti Holding a Statuette, about 1592–1593, oil on canvas, 34-41/64 × 26-29/64 in. Royal Collection Trust / © Her Majesty Queen Elizabeth II 2022, London, RCIN 405988. 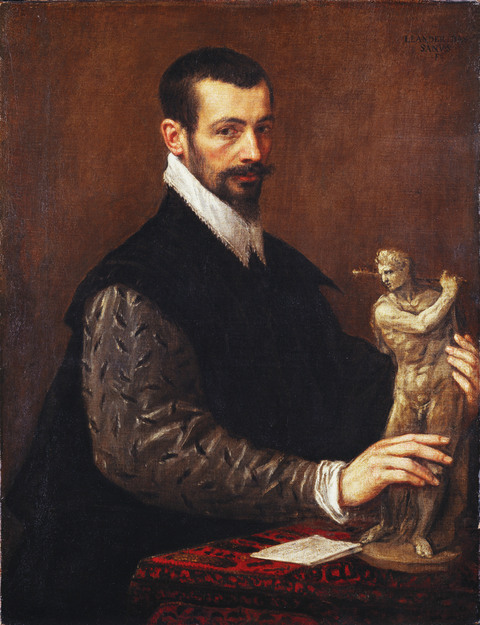 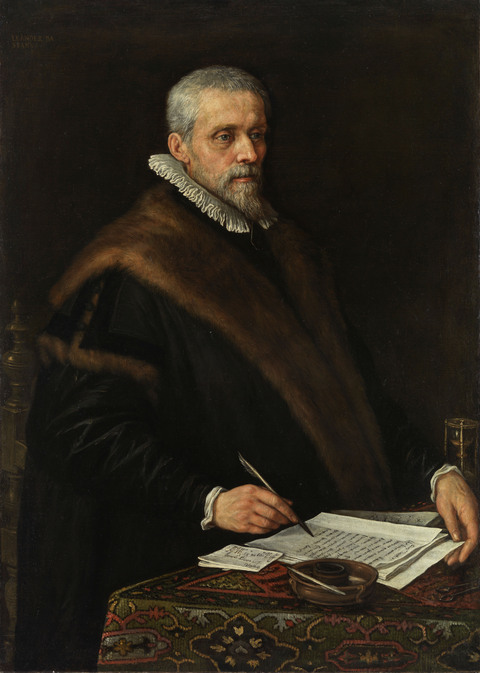 Figure 5: Leandro Bassano (Italian, 1557–1622), Portrait of the Merchant Leonhard Hermann, about 1595, oil on canvas, 52-33/64 × 37-19/32 in. Staatsgalerie, Neue Residenz, Bamberg, Germany, Inv. 8091. Photo Credit: bpk Bildagentur / Art Resource, NY.
7
Link Copied
Already noted above are the paint losses throughout the composition. The portrait also suffers from surface abrasion and discolored varnish that has yellowed, affecting overall tone and brightness. Modeling around the face and proper left sleeve are somewhat muddied. The best-preserved passage is seen in the confident handling of the book and gloved hand. Notable, too, is the fur along the shoulder, expressed through lively flicks of the paintbrush. Similar detailing appears in Leandro’s Portrait of an Old Man, late 1500s–early 1600s (Budapest, Museum of Fine Arts), recalling the freer brushwork of Tintoretto (fig. 6).15 In fact, the Budapest portrait was previously assigned to Tintoretto. Similarly, the Indianapolis portrait was once published as the school of Jacopo Tintoretto.16
placeholder
Figure 6: Leandro Bassano (Italian, 1557–1622), Portrait of an Old Man, late 16th/early 17th centuries, oil on canvas, 45-43/64 × 37-51/64 in. Museum of Fine Arts (Szepmuveszeti Muzeum), Budapest, Inv. 53.477. Photo © The Museum of Fine Arts Budapest / Scala / Art Resource, NY. 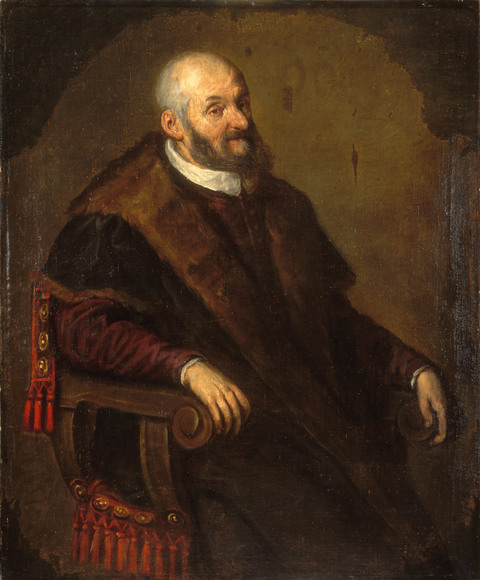 Figure 6: Leandro Bassano (Italian, 1557–1622), Portrait of an Old Man, late 16th/early 17th centuries, oil on canvas, 45-43/64 × 37-51/64 in. Museum of Fine Arts (Szepmuveszeti Muzeum), Budapest, Inv. 53.477. Photo © The Museum of Fine Arts Budapest / Scala / Art Resource, NY.
8
Link Copied
The question of authorship underscores the artistic confluence among artists working in Venice. For example, of this portrait, Porcella asserted, “At first glance, one may think of Tintoretto, more than anything else, if only an analogy, but unmistakable is the chromatic range and typical brushwork of Titian."17 By contrast, Suida argued, “Neither Tintoretto nor Bassano can be the authors of our painting, although this signifies one of the contact points between Titian and his two great followers."18 Importantly, this artistic legacy included their sons, Domenico Tintoretto (1560–1635) and Leandro, who shared parallel trajectories. Both trained within the workshops of their fathers and were receptive to the artistic forces in Venice, where they were leading portraitists.19 A comparison between their styles can be seen in Domenico’s Portrait of a Man of about 1586–1589, which may represent Leandro, his contemporary and friendly rival (fig. 7)
placeholder
Figure 7: Domenico Tintoretto (Italian, 1562–1637), Portrait of a Man, about 1586–1589, oil on canvas, 31-7/64 × 31-7/64 in. The State Hermitage Museum, St. Petersburg, Russia, Inv. ГЭ-3566. 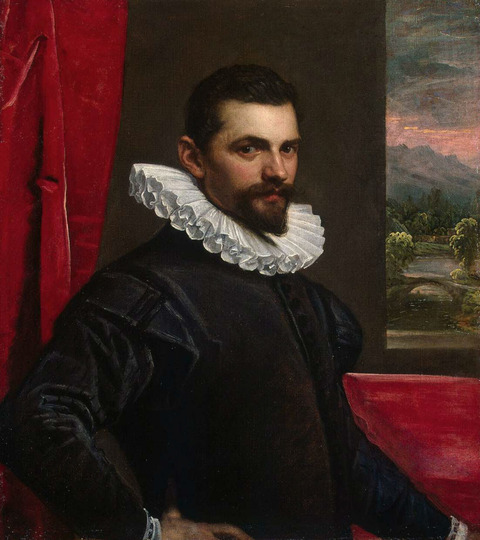 Figure 7: Domenico Tintoretto (Italian, 1562–1637), Portrait of a Man, about 1586–1589, oil on canvas, 31-7/64 × 31-7/64 in. The State Hermitage Museum, St. Petersburg, Russia, Inv. ГЭ-3566.
9
Link Copied
To conclude, the attribution of Portrait of a Man to Leandro Bassano is not unreasonable. He embraced change and drew upon the creative forces at play in Venice. He was guided by his father and influenced by the likes of Titian and Tintoretto, resulting in a style that is difficult to pin down and works that are not easy to date. As to the subject matter, Leandro’s portraits represent a broad slice of Venetian society. They were painted to capture a likeness and were often commissioned to mark an achievement. Sixteenth-century household inventories note that portraits were displayed at home in semi-public rooms. This setting fits the intimate scale and composition of Portrait of a Man; the life-sized figure shown in three-quarter view communicates a thoughtful character and encourages engagement with the viewer. Although this man’s identity remains unknown, this skillful rendering has ensured a lasting impression.

Italian and Spanish Paintings from the Clowes Collection (Bloomington: Indiana University Art Museum, 1965), no. 19 (as Titian, Nobleman with the Glove);

The painting is in stable condition. There is no evidence of cusping or original tack holes. The original plain-weave canvas has been significantly trimmed along all four sides and relined. A natural cracking network beginning in the ground layer is visible. Infrared reflectography reveals the figure was generally sketched using a wet, carbon-based medium. No pentimenti are discernible, but there are slight adjustments and reinforcements using paint. Surface paint was applied using brushes of varying size with some slight impasto. The paint layer in the area of the face has been delicately applied. There are large areas of loss and abrasion throughout the painting.